Due to the current pandemic, many events that should have been held were either canceled or moved online. A great example of this is the annual Borgata Spring Poker Open.   Each year, the event draws a wide variety of participants, both – amateurs as well as professionals. The event usually takes place at the popular Borgata Casino in Atlantic City, however, this year due to the pandemic of the new coronavirus, the organizers decided to come up with some creative solution and call the event “Borgata Spring Poker Online Open Series”, in other words, the event was not canceled, but instead, it became online. 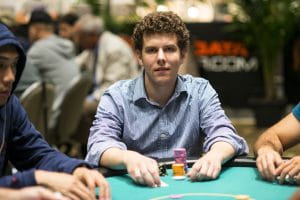 In this online poker event was eligible to participate any qualified player living in New Jersey, where online poker is completely legal. Borgota was being hosted with the help of the US Partypoker network and could be viewed online.  A total of 17 events were part of the series, a few of which have already been played, such as Event #3, that promised a $15,000 prize-money PLO 6-Max Rebuy tournament event, and another aced by the online poker superstar Ari Engel aka “spinach_kale”.

Engel beat 48 individual players to be declared champions on the second day of this series and, due to the chance of making rebuys and joining at late entry, he won a first-place award of $6,300.

Delayed enrollment with a rebuy option was given within the first two hours of event # 3, and the event finished with 60 rebuys. In addition to the rebuy option, 28 players who stood by the time late registration was closed earned 22 add-ons to raise their chip stack. In less than an hour had elapsed before the registration closed before two tables had been left. Then, after another 90 minutes, the final table had all six candidates competing to get in the pot, only five places were paid. Unfortunately, the online player “tc ownz” was the one who left the table empty-handed after “MattEMenz” was disqualified.

Anthony Maio aka “Flawlessbinkage” was the other player at the table next to Engel to turn it into a heads-up battle. Engel wasn’t the master of the chip during the tournament, having finished third in the final round. Finally, he went back to MattEMenz, and then kicked him down. Until the case announced Engel as the champion, everything looked up at him. Maio had the advantage and even began to pull ahead when the head-up battle started, but he lost control and Engel entered back to the game in 15 minutes and won.

Moreover, what makes Engel’s triumph even more remarkable is that the game won by the online poker king just happens to be the very first high-stakes Omaha game ever to be held as part of the event not only online, but also offline.

The online poker series which are part of this online tour continued until April 12. During the days of its operation, the poker fans could enjoy the Borgata Spring Poker Online Open Series from the comfort of their homes for the first time from the existence of this poker series event.