The U.S. Attorney’s Office alleges Clinton Reider, 41, has been operating a large-scale gambling ring in the suburbs of Cleveland since 2010. It is also alleged he built his lakefront property using funds earned from illegal gambling. The property was then used as head quarters for his gambling operations. Federal prosecutors are pursuing a civil forfeiture of the property. Prosecutors a taking this course of action as the property was purchased and developed using illegal funding which is a violation of federal laws. The complaint was officially filed in Federal Court on Monday, August 25th. 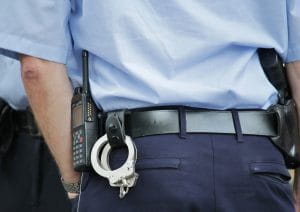 The rear view of a police officer © cocoparisienne from Pixabay

The complaint states, “Although the amount of cash generated by Reider’s gambling operation cannot be determined with any precision, records document he ‘bought in’ on table games at the Horseshoe Casino Cleveland in excess of $1.5 million cash from 2012 through 2016.

Reider’s operation primarily focused on sports gambling. His clients would place wagers through offshore websites located in countries such as Costa Rica, Curacao, and Panama. He paid a fee to the websites who would then accept wagers from his clients. Payments to and from his clients were made using Western Union. To be cautious they limited the cash transfers to $3,000 or less. However, one witness testified to have sent him in excess of $500,000 total using the Pay Pal service.

In addition to sports gambling, he was also responsible for illegal poker games at various locations.

Reider kept records of clients and financials in a notebook which he attempted to destroy and throw in the garbage. However, agents searched through his garbage and were able to salvage some of the information. Additionally, they were able to search his cellphone which contained detailed text messages related to gambling.

Concerning Financials of Reider and The Property

In 2009, Reider filed bankruptcy claiming he had only $50 to his name. The value of the property is $645,000 per the Lake County Auditor’s website. Reider hired 28 different contractors to perform nearly $800,000 worth of work on the property since 2013. The home improvement aspect of this story involves a noteworthy party. $93,000 worth of the contractor’s expenses were charged to the credit card of an unnamed professional baseball player. The complaint names the baseball player as a “co-conspirator” with no further details.

The Secret Service and IRS first learned of Reider’s gambling operation in 2015 before working to build the case against him. Between 2012 and 2015 he had $270,000 in verifiable taxable income yet spent nearly $1.5 million which raised a red flag. Between 2012 and 2016 he deposited over $400,000 worth of cash into a personal bank account in addition to $420,000 from the Pay Pal service. Prosecutors allege it was all related to his gambling operation.

He funneled some of the money to his parents’ bank account and agents say those deposits correlate to gambling activity they’ve confirmed. It was with their help that he got the loan to purchase the property following his bankruptcy from two years earlier. He also used the money to make mortgage payments on the property. The balance of the mortgage was paid off in 2018.