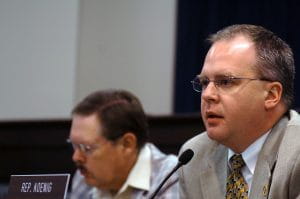 Koenig and some other lawmakers were inspired by Indiana’s huge success in terms of sports betting. The state of Indiana has generated around $1 million of tax in October as the bet lovers wagered on more than $91 million statewide on sports. Koenig believes that if sports betting both physical and mobile and online gambling are legalized in Kentucky, the Bluegrass State could be able to make around $20 million annual tax revenue. Furthermore, he added that the money received from the tax could be used for regulation and addiction prevention as well as solve the issue with the pension shortfall that Kentucky is facing lately.

Koenig has already proposed a sports betting bill earlier this year, but it even fails to make it to the committee and even if he did, it would have been most likely rejected by governor Matt Bevin who was known for his anti-gambling beliefs. For Koenig’s luck, Bevin lost November’s election against Andy Beshear who seems to stand for pro-gambling expansion. Therefore, if the bill that should be proposed by Koenig next year is similar to the previous one it would tax retail sports betting revenue at 10.25% and mobile revenue at 14.25%. On top of that, the bill might even include a proposal for the legalization of daily fantasy sports.

Despite the fact that Kentucky is well-known for horse-betting since a long time ago, it still has no casinos or pro sports teams except for two stellar men’s basketball programs at the University of Kentucky and Louisville. In addition, Kentucky is proud to have a state-run lottery while its horse-betting industry holds all the power of the state.

Koenig also mentioned that he will also fight for the protection of the horse racing industry as he has been reportedly asked by Thaer to include fixed-odds wagering on horse racing when he presents his sports betting bill.