Plans Set Out for The Return of Greyhound Racing By GBGB

When the current restrictions by the government due to the novel coronavirus (Covid-19) are eased, there are provisional plans released by the Greyhound Board of Great Britain (GBGB) to resume greyhound racing behind closed doors. Five phases have been proposed by the new operational policy. Each phase is expected to last at the very least two weeks and would be subjected to strict controls. All this will be done while keeping in check with the latest measures ordered by the government. Prior to the nation-wide lockdown springing into effect, the GBGB had already moved all its races behind closed doors. In Britain, greyhound racing has been suspended since March 24. 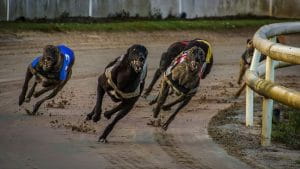 The first phase would have trial meetings that are to happen behind closed doors, phase two on the other hand would allow for closed venues and for racing to resume. Every meeting will be restricted to a maximum of 10 races per meeting as each race will have a minimum of 30 minutes between each race. The GBGB proposes that for the third phase, racing to continue behind closed doors but with just 12 races at each meeting and a 25-minute gap between the races. Phase four will just be a build up on this with each race taking place behind closed doors, with only a 20-minute break between races but no limit as to the number of races to be held. For the last phase, normalcy will be resumed that will see racing return to how it was with people being permitted to attend meetings, this will happen with the adherence to government guidelines on both public gatherings and social distancing.

Social Distancing to be Enforced Around the Racetracks

The GBGB have however been quite vocal of how irresponsible it would to seek the resuming of racing without taking the time to fully prepare and adopt all the appropriate health and safety measures. This operational policy therefore presents an effective means for phasing in a return to greyhound racing – prioritising in the first instance graded races to support the vast majority of greyhounds and with the minimum amount of movement between racecourses. They are confident that the process being proposed gives them the best chance of progressing quickly and safely through the phases to an eventual resumption of normal racing activity, albeit behind closed doors. The proposed policy will now be put to the government’s Department for Digital, Culture, Media and Sport, as well as the Department for Environment, Food and Rural Affairs, for approval. Confirmation of GBGB’s plans comes after the British Horseracing Association released a provisional racing schedule ahead of the sport’s planned resumption, with the first action since the coronavirus enforced shut-down set to take place over the weekend of 23-24 May. GBGB manager Mark Bird said “The reality will be that racing behind closed doors will most likely only provide a betting product to online customers in the short term as LBO’s will likely remain closed, but the imperative here is to start racing again, as that will at least allow incomes to start flowing again to both tracks and trainers.”