Battle Over Sports Gambling In Georgia Heating Up

Sports gambling might be coming to Georgia. House Speaker David Ralston announced a special committee on economic growth, with a focus on legalizing sports gambling. Representative Ron Stevens is among those on the committee and a supporter of casinos. Ralston’s press release stated: 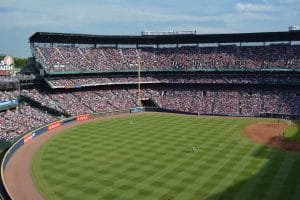 Turner Field, home of the Atlanta Braves © wframpton from Pixabay

“We would be remiss if we did not explore options for new sources of revenue to continue funding priorities while keeping the tax burdens on Georgians as low as possible.”

This follows the 2018 ruling by the United States Supreme Court that states could legalize betting on college and professional sports if they choose. Before the Supreme Court ruling, Nevada was the only state to legally accept sports wagers. Following the ruling, 11 states have seized the opportunity to generate additional revenue.

Not Everyone Supports Legalized Sports Betting

The Georgia Baptist Mission Board is strongly opposed to legalized gambling. So much so, that they’ve resorted to lobbyists to oppose gambling legislation for several years. Their lobbyist Mike Griffin told the Atlanta Journal-Constitution:

“What they don’t tell you is that every dollar raised in revenue costs three dollars in social expense. What’s being overlooked is that Georgia’s doing well economically. They’ve done it with no gambling.”

The opposition to gambling is facing a challenging adversary as the gaming industry and professional sports teams appear united in their cause. Additionally, their financial resources are more than capable of political influence.

Prices of tickets and concessions at professional sporting events continue to skyrocket. Taking a family to a game can cost as much as taking them on vacation. Those factors combined with high-definition televisions and improved broadcast production mean more people are choosing to watch games at home.

Professional teams are exploring new ways to increase attendance and gambling is among them. A meeting to discuss the possibility is slated for Fall of 2019 and each of Atlanta’s major professional teams will be represented by members of upper – management. Those expected to be in attendance are Steve Koonin, CEO of the Atlanta Hawks, Rich McKay, President and CEO of the Atlanta Falcons, and Derek Schiller, President of Business for the Atlanta Braves.

Senator Brandon Beach is a member of the Senate Study Committee on gaming and an advocate for horse-gambling. He told the Atlanta Journal-Constitution:

“They will come talk about it and explain how it might work. What they’re trying to do is drive attendance. The fans want it. The franchises need it.”

How Legalized Gambling Would Impact Georgia

One approach is to create a digital barrier, restricting online gambling to within the state or within venues where the games are played. The latter plan is what the professional teams are advocating in an effort to revive attendance. Digital barriers resemble what Tennessee recently approved, which is gambling that only exists online. It would also eliminate any need to construct new gambling facilities such as casinos or sportsbooks.

Georgia Governor Brian Kemp recently pledged to increase the salaries of teachers by $5,000. One path to fulfilling that promise is by increasing the state’s revenue. It’s estimated that legalized sports gambling would generate an additional $50 million per year.