The following are the best daily fantasy tight end plays for week 10 of the NFL season. 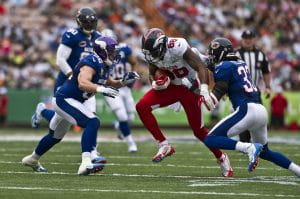 Travis Kelce is the best tight end at fantasy football’s thinnest position. In fact, he’s the only tight end on Yahoo’s “Can’t Cut” list. He’s got a high floor with at least 8 targets in every game this season except one. Last week against the Minnesota Vikings he caught seven passes for 62 yards, and that was with Matt Moore playing quarterback. Moore didn’t even play in the NFL during the 2018 season because he was coaching high school football.

In week 10, Moore will be replaced by reigning NFL MVP Patrick Mahomes who returns from his knee injury. With Mahomes back in the lineup, every player on the Chiefs gets a huge fantasy boost as they will have one of the most explosive lineups in the league. They’ll be facing the Tennessee Titans who are 16th in points allowed to tight ends, but with Kelce and Mahomes on the field together they’re a dangerous combination regardless of the opponent.

George Kittle got off to a slow start this season after being projected to be a top-three fantasy tight end. He failed to top 60 yards receiving in each of the 49ers’ first three games. Since then, his production has improved significantly with four games of 70 yards or more.

In week 10, he’ll be facing the Seattle Seahawks who allow the 7th-most fantasy points to tight ends. Additionally, it’s a huge game with the 49ers leading the division and the Seahawks in second place. Look for the undefeated 49ers to utilize their top receiving threat as they hope to take a commanding lead for first place.

The Chargers have had a disappointing season thus far and part of that may be due to the absence of Hunter Henry, who missed four games due to injury earlier this season. He’s fully recovered now as his production on the field indicates. In his first game back from injury he had 100 yards receiving and two touchdowns, which is a dream game for a tight end by 2019 standards at the position.

Chargers’ quarterback Phillip Rivers has targeted him at least eight times in three of the last four games and Henry has solidified himself as a top fantasy tight end. In week 10, Henry will be facing the Oakland Raiders who have allowed the 3rd-most points to tight ends this season.

Coming into the season very few people expected Austin Hooper to be near the top of fantasy football tight ends. However, Atlanta with a 1-7 record has been disappointing and the more often they fall behind on the scoreboard the more they throw the ball trying to catch up. Hooper’s fantasy production has been benefited from those circumstances.

Hooper has caught a touchdown pass in three consecutive games with Atlanta playing from behind. In week 10, they face the heavily-favored New Orleans Saints. The Falcons will likely resort to volume-passing as they have so often this season meaning a good fantasy day for Hooper.