Oddsmakers didn’t think the Detroit Tigers stood a chance to beat the Houston Astros. It was so unlikely that the money line for the Tigers paid 5-1 or +600, in American format. The Tigers defeated Houston by a score of 2-1 which in terms of betting lines is the biggest upset in the history of Major League Baseball. 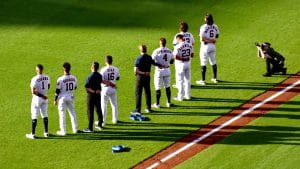 According to ESPN.com, no baseball team in the last 15 years has had even had a price of +500 for a single-game wager. The previous record for longest odds was in 2016 when the Atlanta Braves were +485. In that game, the Dodgers were favored and prevailed.

A Major Mismatch on Paper

The Tigers entered the season with the understanding they had zero chance at contending for the World Series so they’ve committed to tanking for the future. They recently traded one of their best players, Nicholas Castellanos to the Chicago Cubs in exchange for prospects as part of the rebuilding process. The Tigers entered the game against the Astros with a record of 37-86, which is the worst in the American League.

The Astros are at the opposite end of the spectrum. The 2017 Word Series Champions are contending again in 2019 and entered the game with a record of 81-46, good for second-best in the American League. While the Tigers were selling the Astros were buying and won the trade deadline’s biggest prize in pitcher Zack Greinke.

All Factors Pointed To An Easy Astros Win

On top of overall win-loss records, the game was played in Houston where the Astros had a 45-15 record on their home field. By contrast, the Tigers entered with a 15-43 record on the road.

Starting pitchers play a major role in setting betting lines and the Astros had one of the best taking the mound in Justin Verlander. Despite taking the loss his record stands at 15-5 while leading the American League in both ERA and strikeouts.

Another storyline in this game was Verlander facing his former team. Verlander spent 13 years playing in Detroit and won the Cy Young award and MVP as a Tiger in 2011. Verlander was dominant in this game but received little help from his offense. He only allowed two hits in the game but they were both home runs. After the Astros lost the game, he refused to speak with a member of the Detroit media, Anthony French.

While it’s only one game of 162, the win gave the Tigers’ fans and players a rare bright spot during a difficult season. Detroit manager Ron Gardenhire told MLB.com, “For our ballclub it’s huge. I can tell you that right now. I haven’t seen them this excited in a long time.”