Once upon a time a gamblers way to place a bet was to make a wager and watch the game until the end to see the result. Those days are now in the past as the sports gaming industry is growing and evolving. The fastest growing feature is the Live betting or In-play betting.

A Fresh New Start for Tennis Fans – A Look Into Flash Bets. 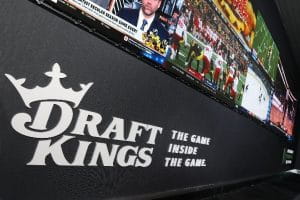 The company’s logo on a sports event

To mark the beginning of the new Wimbledon tournament, DraftKings Inc, the sports betting operator has launched a Flash Bet, a live betting feature, for gamblers who love to part take in sports and enjoy every bit of it. The latest innovation which was released on Sunday is currently available only on tennis and accessible on DraftKings sportsbook. This will allow customers to place live, in-game wagers quickly between points in a given match. Once bettors place their wagers via the Flash Bet tab on the mobile or online DraftKings Sportsbook, they will be able to view a timeline of their bet’s results and receive payouts within seconds after the play is over.

The excitement is even bigger by knowing that the wagers could be placed from any point including the tournament itself. It all happens via the embedded match graphics which “show the ball as it moves across the court in real-time with descriptions of the service, points won and court type”. To get an insight of the product you have to reside or be in a country where the Flash Bet functions, such as Mississippi or New Jersey and download the live betting app to your Android or iOS device.

The Principle Behind the New Feature.

The senior VP of the Product Research and Development at DraftKings gives an explanation: “Live wagering is already widely popular today, but also represents a crucial part of the customer experience and engagement tomorrow. Short of playing on the court themselves, we are wholly invested in bringing our customers as close as possible to Wimbledon this year, while also giving them a taste of the lightning-quick innovations to come.” For many serious bettors tennis seems to be a matter of profitable income, but for the casual ones it’s another tempting innovation which cannot be missed. Up till now, live betting in tennis was restricted in games, sets and matches with each new wager taking several minutes to be published and paid out. Now it’s faster and has the capacity to pay instantaneously. Live betting seems appealing to different people for different reasons. Some feel they have an advantage in terms of information after watching part of a game. Once they get the idea of which players are the best that night or which team is better at the time, they believe they can better forecast the result of the game, current drive, or simply the next play.

DraftKings are a global entertainment company who have been on the market since 2012 based in Boston, MA. The company started as a small business that later expanded into a big phenomenon especially by adding enough sports products for online speculators to bet in. Football, basketball, hockey and baseball were some of the sports accountable for the growth of the company. Now with offering live online betting on the tennis court DraftKings are on the top of the world. If the debut of the Wimbledon trial becomes a success, sports enthusiasts can expect to see Flash Bet and similar competing products used for MLB, NFL, NCAA, NBA, and NHL betting, among other markets. Live betting is finally becoming live.