UK racing stakeholders would have to prepare for some important changes if the government is able to negotiate a Free Trade Agreement (FTA) of 1 January 2021 in support of equine transport deals between the UK and the EU.

The ‘Departure from the European Union’ notice was given by the “Thoroughbred Industries Brexit Steering Group.” 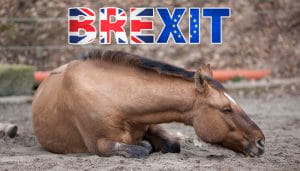 The steering group has told its members not to transfer horses at least for the first two weeks of 2021,’ both from the UK to the EU and from the EU to the UK.

While the United Kingdom hopes that its FTA will be guaranteed, the racing leadership warned the Government that sport and its stakeholders also need the approval of some pending issues.

In order for thoroughbred carriers to be allowed transportations of animals in Europe and EU carriers to work within the UK, the administration was called on to explain the status of the UK as a third country’ and how this will affect the list of animal welfare uses following the completion of the transitional phase.

After the transition, the UK racing industry would entail the acknowledgment of general stud rights.

From 1 January There Will be Increased Friction in Thoroughbred Movement

The steering group has alerted all participants that from 1 January, increased friction will be expected in thoroughbred movement through the main ports.

If an FTA is assured, the race would enable the Government, as originally negotiated between France and Ireland, to have clear arrangements on equine transport health laws and even a replacement of the existing ‘Tripartite Agreement.’

Julian Richmond Watson, Chairman of the Brexit Steering Committee mentioned that they are aware that some people want to make preparations for 2021, but the situation will not be clear until the details of any new UK-EU arrangements are defined.

“Our message right now is ‘Stand By, Change is Coming’. We would ask participants to keep up to date with the latest information regularly via the Brexit page on britishhorseracing.com and await direct communication from their membership body once we know the details.” – stated Watson.

Furthermore, he added that they will continue working closely “with Defra and all other relevant UK government departments which are aware of the needs of the racing and breeding industries. He also clarified that they are in regular contact with their counterparts in Ireland and France and other EU jurisdictions.

The UK officially left the European Union on January 31 2020 and is the first and only country that has decided to left the union after being 47-year-long membership. This has happened after in 2016 a nation-wide referendum showed that 52% of people were in favor of the UK leaving the EU while 48% have voted for the UK to continue being an EU member.

After the departure of the UK from the EU a.k.a after Brexit, the country had to solve many issues and the UK racing is also one of them. The “Thoroughbred Industries Brexit Steering Group” is an organization that is in charge of racing’s preparations for Brexit.