Kolonias Came to the Top of a 541 – Entry Strong Field

The popular event 2019 World Series of Poker Europe (WSOPE) €10,350 Main Event finally received its winner – Alexandros Kolonias who got the opportunity to lift the coveted gold bracelet for the winner shots. The Greek poker player came to the top of a 541- entry strong field after leaving behind Claas Segebrecht from Germany. 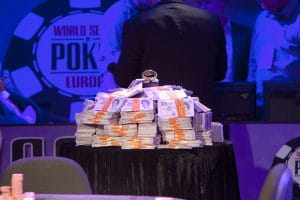 “I still haven’t figured it out in my mind what actually happened. I am really happy about the way I played in the beginning. One level was not so good when we had four left, but things worked out for me” – stated Kolonias in an interview right after his legendary victory on WSOPE.

Despite the fact that Kolonias does not play many live events per year, he not only earned his first winning score, but he also expressed the ambition to continue his usual routine of having played on 5 to 6 festivals per year.

The legendary victory that Kolonias brought to his home country Greece was sixth in the history of the country and third bracelet this year, but the best thing is that this victory gives Kolonias a place in the top spot of the Greek all-time money list with more than $3.7 million in recorded cash on the live circuit.

Alexandros Kolonias is a Greek poker player born in Volos (Greece) but currently lives in England’s capital city, London. Mainly focused on the online grind, Kolonias is known under the username “mexican222” and earned more than $3.1 million in recorded cash on the live circuit.

For his victory on the WSOPE, the 33-year-old explained that he had a very good position as he was in chips with a position on the chip leader and on his left the short stack. He also added that if he could have had the chance to choose positions for every player where they could start the final table he would have picked exactly like that because he is convinced that it was crucial.

The Greek poker player who won the WSOPE was challenged by 9 other exceptionally good poker players by 9 different countries. Between the 6 hopefuls who had to return to their seats for the final showdown were also Anthony Zinno and Dario Sammartino who were 2019 WSOP Player of the Year contenders. Zinno won third place while Sammartino this time ended up in the fourth place after a very unpredictable game.

The first player who had to leave his seat was WSOP bracelet winner Rifat Palevic while the popular local player Anh “David” Do end up as fifth.

Nevertheless, despite the fact that the final poker game was a real roller-coaster of emotions, the true star of the game ended up Alexandros Kolonias who brought to his home country an unbelievable amount of $3.1 million in recorded cash after earning it on the live circuit. Kolonias could also pride himself for leaving behind some legendary names in the poker world such as Zinno, Sammartino, Palevic and Do who already have proved their immense potential in poker.