Indianapolis Colts’ quarterback Andrew Luck shocked the football world by announcing his retirement just two weeks prior to the start of the 2019 NFL season. The move comes as a surprise considering Luck is only 29 years-old and 2018 was one of his best seasons as a professional. The decision stunned fans, and additionally had an impact on the betting lines for the upcoming season.

The Colts Expected To Be Contenders In 2019 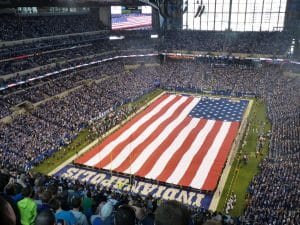 The Indianapolis Colts had a 10-6 record in 2018 and qualified for the playoffs as a wild-card team. They defeated the AFC South Division Champion Houston Texans 21-7 in their first playoff game before being eliminated by the Kansas City Chiefs in the divisional round.

Back in 2012, the Colts selected Luck with the first overall pick in the draft. In recent years they’ve surrounded him with young talent by hitting on several other draft picks such as Quentin Nelson, Malik Hooker, Darius Leonard, and Marlon Mack. Those players are now faced with the challenge of contending without their star quarterback and oddsmakers don’t like their chances.

Earlier this summer when Luck was expected to play, the Colts had 16-1 odds to win the Super Bowl, good for top ten contender status in the eyes of sportsbooks. After Luck’s retirement announcement those odds plummeted to 50-1 and even 60-1 with some outlets.

In addition to hurting the Colts’ betting probability, several of their key players also had their value diminished in fantasy leagues. The Colts’ offense will certainly be less explosive without Luck and the statistical output of key players will see a reduction as compared with the 2018 season. Jacoby Brissett is a fine backup quarterback by NFL standards but a steep drop-off from an elite talent such as Luck.

Wide receiver T.Y. Hilton, tight end Eric Ebron, and running back Marlon Mack all had standout seasons from a fantasy football perspective in 2018. Without Luck delivering the ball their value in fantasy leagues and daily fantasy play is reduced substantially. They are being selected in fantasy drafts two or three rounds later than prior to Luck’s announcement.

Reasoning Behind The Stunning Retirement

Unfortunately, word of Luck’s retirement was leaked during a preseason game at Lucas Oil Stadium against the Chicago Bears. Disappointed Colts’ fans reigned down boos from their seats unaware of why he made the choice to end his career.

At a press conference Luck discussed the reasoning behind his decision and attributed it to his health and quality of life. He told CBS Sports, “This is not an easy decision. Honestly it’s the hardest decision of my life. I’ve been stuck in this process. I haven’t been able to live the life I want to live. It’s taken the joy out of this game. The only way forward is to remove myself from football.”

The process he’s referring to is likely getting injured and enduring rehabilitations only to get hurt again. His extensive injury history includes torn cartilage in two ribs, partially-torn abdomen, lacerated kidney, a concussion, and a torn shoulder labrum which caused him to miss an entire season. Taking all that into account, it’s easy to understand why a superstar would step away from the game even during the prime of his career.