Many Poker Stars Will Be Present on the Tournament

The Canadian poker legend, Daniel Negrenau is confirmed to co-host a poker tournament for Democratic presidential candidate Andrew Yang. Negrenau will be accompanied by Lena Evans and Katie Kalvode on the event which will take place on December 15 at the Las Vegas Mosaic Theater. The opening of the event will start with a cocktail reception between 6 pm and 8 pm while the main event will take place from 8 pm till 10 pm. 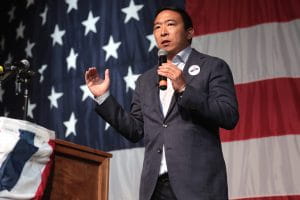 There are still a lot of tickets available for this fundraiser to purchase. The so-called Early Adopter ticket could be bought for $300; the Participant ticket costs $500; a Co-Host package needs a $1,000 fee, and the World Series Champions VIP Package could be bought at the cost of $2,800.

In fact, only those who have a ticket of $2,800 would be able to get into the poker event where stars like Antonio Esandiari, Dutch Boyd and Jeff Madsen will participate. There will be a range of rewards on offer for those involved in the poker tournament. It involves spending time with past champions of the WSOP on the Singularity Yacht and personal poker encounters. Suddenly up for grabs is a VIP meeting with world-renowned DJ Steve Aoki.

Andrew Yang Is Very Popular Between the Poker Community

Yang’s poker community support went to a whole new level in October when he stated that poker in every state should be legal. He reinforced this comment by saying it would stop people from using potentially risky offshore poker sites. He also believes that income from taxes would be lucrative and useful.

Following his remarks, many poker players, including Negreanu, gave Yang a public show of support. Yang also said he wants to give a universal basic income to all People, get rid of private prisons, grant all Medicaid, and impose a carbon tax.

“This is just one small part of the equation for me, but if you are someone who wants online poker, he’s the most logical and practical person who is also centrist, he’s not a lefty or righty. He’s more in the middle and he’s just practical” – stated Negrenau regarding his support of Yang.

Furthermore, Yang is expected to be a guest of Joey Ingram’s podcast where a wider poker audience around the United States could get to know him and perhaps, even show their support of him in the future.

Yang Still Has a Strong Competition

Despite the fact that Yang has received a lot of encouragement from the poker community, in the polls he lags behind other Democratic presidential nominees which is why he needs the support of a wider poker audience.

Until now, he has campaign donations of over $9.9 million which is a huge difference from the donations of $15.7 million of Joe Biden, and $28 million of Bernie Sanders. Nevertheless, after the previously mentioned event, the support of Yang between the poker community might rise even more which will push him a little bit forward and make him become a treat of his other Democratic peers, but rivals in this game.

If that happens, the poker community might benefit a lot considering the opinion of Yang regarding gambling.