Gold Rush Gaming has applied to bring horse racing to Tinley Park, a suburb of Chicago about 30 miles southwest of the city. The site was formerly a mental health facility and was being considered for a retirement community. Those plans have been abandoned to pursue a horse track and casino instead. The property has about 1.5 million square feet of building space to work with. The mental health facility closed back in 2012. 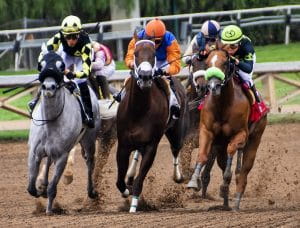 Horses participating in a race © Clarence Alford from Pixabay

Real estate developer Rick Heidner has partnered with Timothy Carey, the general manager of Hawthorne Race Course located in Stickney, Illinois. Heidner is a part-owner of Gold Rush Gaming and was involved with the plans to build the retirement community. Illinois Governor J.B. Pritzker signed a gambling bill in June of 2019 to legalize sports gambling in the state. The legislation specifically allows for one casino and one combination of casino and horse track to be built in Chicago’s south suburbs. This opened the door for a horse track and casino. Tinley Park became viable due to both location and available land for the facility.

The neighboring state of Indiana also passed legislation to expand legalized gambling. The two states will be competing for business in the gambling industry and a racino could help give Illinois the upper hand. The only horse tracks with gambling in Indiana are near Indianapolis, nearly 200 miles from Chicago.

The grandstand for the horse track is expected to have a seating capacity of around 4,000. The actual track would extend 7/8 of a mile. The complex would also include amenities for placing wagers on the races.

Before any ground can be broken, Tinley Park must first acquire the land which is currently owned by the state of Illinois. Purchasing the land is more complicated than simply negotiating a price both sides agree upon. In 2015, Tinley Park reached an agreement to buy the land before opting out of the deal. An assessment in 2014 determined the land is contaminated. It requires an updated environmental evaluation to confirm it meets standards before the sale. The projected cost of decontamination is over $10 million.

Additionally, some of the property lies within industrial zoning. Uses such as racing or entertainment are currently prohibited on the property. Local officials are working to amend the restrictions of the zoning ordinances. Village Manager David Niemeyer told the Chicago Tribune, “Both sides are working very hard to make this happen.”

Tinley Park is already home to a Convention Center and Hollywood Casino Amphitheater. The new Illinois gambling bill permits casinos to utilize temporary locations. The Convention Center could serve as a gambling complex until construction is completed on the permanent facility.

Innovation Group and Convergence Strategy Group, two firms based out of New Orleans are tasked with determining if the Tinley Park location is feasible. They are researching to gauge factors such as the economic impact on the town.

Heidner is already working with Tinley Park officials towards purchasing the land and acquiring the required licenses. The project will also require a gaming license for which they have already applied. The racing board will hold a hearing on September 17 to determine if the license will be issued to the newly formed Playing In The Park, LLC.