Rice is Enduring His Penalty

Upon confirming the violation of Scottish FA gambling laws, Hamilton Academic head coach Brian Rice was excluded from the dugout for 10 matches. However, only five of them are to be completed immediately, with the others postponed by summer 2021 for good behavior. 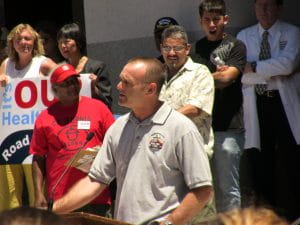 Rice was convicted from 14 July 2015 to 15 October 2019 of violating the law in each season and discovered his destiny at a Hampden SFA hearing. He has decided to take a number of measures to ensure that he has not again offended.

To escape another five-game ban, he should regularly attend recuperation meetings, must not break the rules again and Hamilton on the last day of each month.

In an initial explanation, the president of the judicial panel told the press that the chosen duration of suspension represents the extent of the rule violation concerning the significant number of low-value bets. The Scot might have risked a suspension of at least three games and a maximum of 16 plus £ 100,000 in penalty.

Guillaume Beuzelin Will Be Responsible for the Team

“The tribunal chose to suspend one half of the sanction to reflect the genuine efforts it considered Mr. Rice has made to ‘put his life and that of his family back together again’ and to take account of his genuine expression of remorse for his breach of the rule and the effect that has had on his family, the club and the Scottish FA,” explained the tribunal chair.

Rice, who became head coach of Accies in January last year, outlined it as a “lapse” in a statement on the website of his club where Hamilton says they have fully cooperated with the organization across the whole investigation process.

Rice had told BBC Scotland “I have done wrong” on arriving at Hampden and that he is going to take whatever penalty was given out. Guillaume Beuzelin, assistant manager, will be responsible for the team at home to Celtic on Sunday, while academy director George Cairns will be in charge of the media related things.

Hamilton explained that it is the tribunal’s hope that the suspended item will not be enforced but will play a role in helping Rice from returning to the profession that has afflicted his life so much. Hamilton also mentioned Rice who had openly admitted addiction to gambling, had reported by himself the crimes to the governing authority.

Leagues are Funded By Gambling Companies

After Rice admitted to being a compulsive gambler, with the leagues and both major domestic cups currently funded by gambling companies, the focus on bookmakers’ involvement in Scottish football increased.

However, the former star of Hibernian, Nottingham Forest and Falkirk claims Scottish football requires the investment but players and coaches need to accept personal responsibility. Rice, who has self-reported to the SFA for the offenses, has promised to take steps to ensure that he does not cheat again including undertaking therapy sessions, and Hamilton has to certify that their head coach has not made a bet since 17 October 2019 at the end of each month.

Brian Rice is a 56 years old football player and coach who currently holds the position of head coach of Hamilton Academical.