The origin and the rise of the Greyhounds dog racing industry

American Greyhounds dog racing industry is dying out due to the modern age inventions and increased public awareness that it’s cruel and inhumane. One of the oldest sports in the world is going into extinction but only in Florida. 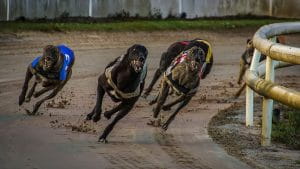 Gambling with its many forms of betting dates back from the Egyptian and Roman times when people had been short on money but deficient in entertainment. As a sport, Greyhounds dog racing derives from the old form of entertainment known as “cursor”. This was mainly practiced by the nobles in the Middle Ages and it involves hounds chasing pray animals such as rabbits or hares on a given track. The winner is the hound that catches the prey. The greyhound doesn’t have an acute sense of smell but with highly developed vision it can chase objects and can run up to 45 miles per hour for its pursuit. The dogs are sleek and can run fast which makes them a perfect entertaining breed. The spectators could make bets on the winner even then. The sport reached its pinnacle in England in the 19th century.

Arriving in the US

It was brought in the States in 1919 when Owen Patrick Smith decided to build the first racing track in California. Being thought as cruel and bloody, the game’s strategy was slightly changed as the live pray was replaced by a mechanical rabbit like lure. This lure consists of a stuffed toy or a small plastic windsock that is being chased around. The business was booming, the bettors were pleased. It was later brought to Florida where it became a permanent success. It became the sport of Queens and celebrities. Reservations had to be made ahead, the stands were packed, the trackside restaurant was a VIP area and even had a dress code. Over time the industry spread in other 15 states and gained 46 racing tracks. As recently as 1991, $3.5bn was wagered legally at 60 greyhound tracks in 19 US states.

These numbers were gradually changing with each passing year. With the legalization of the casino as well as the development of the online betting, spectators were saturated so the sport became an afterthought. Flagler Dog Track at Magic City Casino, near Miami International Airport, has been empty in the recent years, forlorn for what it once was and attracting only casino customers who had gone out for cigarettes. In the past years, the biggest grandstands have been deserted and at times visited only by veterans who couldn’t even wait for the final results to come out. The sport survived because of the state’s mandate for the tracks to stay open so people won’t lose many jobs. According to the state director of Humane Society of the United States there are only 11 tracks left with 6 states with $500m wagered.

In addition, animal activists have been trying for years to put an end to this sport seen as abusive and repelling. The industry has been much criticized for how it treated the dogs and their living conditions. With the proposal of Amendment 13, animal lovers were sent into battle with the track owners. The amendment passed with 69 percent of the vote signifying the upcoming ban in 2020. Kitty Block, an active president and chief executive of the Humane Society of the United States had this to say on the matter,” We worked to stop the cruelty.”