The Las Vegas Strip is known for having one of the largest concentrations of hotels, casinos, and entertainment venues on earth. And in all those casinos, smoking isn’t just permitted, it’s everywhere. 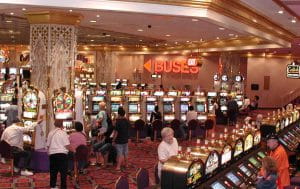 If workers’ health becomes the emphasis, smoking may be banned in casinos. But it’s not likely © Wikimedia Commons

While some casinos offer non-smoking areas, like the 1,000-square-foot space in Harrah’s or MGM’s non-smoking slot area, you’ll likely have to brave some cloud of smoke to get there. For those visiting Vegas, a few days around that secondhand toxin is probably relatively harmless. But for those working in Vegas casinos for decades, the secondhand smoke is taking its toll.

Here’s where the US stands on smoking in the workplace as a whole, and why smoking in Vegas casinos is starting to get extra scrutiny.

Workplace Smoking Laws in the US

It will likely surprise most Americans to learn that smoking is permitted inside many workplaces in states across the country. Normally, this requires the employer creating a separate smoking area that no employee is required to enter. In some cases, a smoking break room would require a non-smoking break room. Further, most states allow the employer to simply ban smoking inside the place of business. From liberal states like California to conservative states like Alabama, this is the state of smoking in the workplace.

The emphasis is on the employee’s choice. They can stay comfortably away from second-degree smoke, join the smokers in the designated areas, or be a smoker themselves. But, in the vast majority of states, employees not made to walk through a smoke-filled environment day in and day out.

However, if someone works outdoors, smoking laws everywhere suddenly become significantly more relaxed. Even a well-ventilated indoor space can create a layer of smoke throughout the room, whereas an outdoor area, like most outdoor spaces, minimize the impact of secondhand smoke and therefore doesn’t necessitate a smoking ban in the same way.

But that also points out how these smoking laws most closely protect those in an office environment. More specifically, smoking laws across the US seem designed to protect employees from their co-workers. But if the customer is allowed to smoke, the employee serving them seems largely out of luck. That is, without a major legislative push.

The Call to Ban Smoking in Vegas Casinos

The push to ban smoking in Las Vegas casinos was ignited by Teresa Price, a 63-year-old dealer who’s been working the casinos for the better part of three decades. After being diagnosed with non-Hodgkin’s lymphoma and heart disease that required medical leave in 2017, she connect the condition to secondhand smoke. Why? Because she’s never smoked a cigarette – but she has been around cigarette smoke for years.

Teresa Price told the Las Vegas Sun: “I love the job and meeting new people every day. But the environment is unhealthy.”

Unfortunately, Teresa Price isn’t the only worker experiencing health issues. She’s among many members of the casino dealers’ union who have filed complaints about the hazard working conditions of constant exposure to secondhand smoke. The only more persistent complaint is customer harassment.

So, while casino visitors are creating a workplace that guarantees contact with carcinogenic smoke, they’re also creating a hostile work environment. Be better, gamblers!

While there’s recently been a call to ban smoking in outdoor public parks in Las Vegas, the push to ban smoking in casinos is a lot more controversial. Today, nearly 90% of state-licensed casinos across the country permits smoking, and pretty much every tribal casino has close to no restrictions on lighting up. In Las Vegas, you can find a smoke-free hotel room. In fact, most hotels don’t allow smoking in their rooms. But you won’t find a completely smoke-free casino.

While the dealers’ unions in Vegas are powerful, the casino owners basically run Vegas. Banning smoking is going to be a very difficult push. What’s more likely is a few non-smoking casinos, but even that seems to be a long way off. Only time, and support for the casino workers, will tell.