According to a recent study made by the American Gaming Association, the NFL huge popularity is a result of legalized sports betting. A national survey which was conducted by Morning Consult claims that 38 million adults, which are 15% of the American population, have plans to wager on NFL 2019. 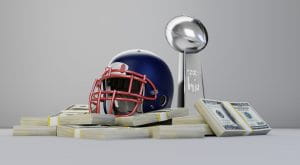 The study also reveals that an estimated 7 million citizens will take their betting business to a regulated sportsbook. This fact indicates a spike of 21% from last year when 5.7 million adults showed interest to wager on NFL.

Thanks to this national survey which was conducted on 11,011 adults the American Gaming Association is now aware that the public really does want legal sports betting market, something which also influences the public’s connection with the NFL.

The study says that 39% of the NFL fans intent to wager on the professional football’s league 100th season while additional 24% of the American population claim that they would make sports bets if sports betting was legal in their home state. On top of that, even 75% revealed that they are more likely to watch games on which they wagered while 28% of the people admitted that they are more likely to attend games on which they wagered.

“Increased popularity means the industry is providing more consumers with great entertainment options than ever before. If the past is any indicator, legal sports betting is just getting started,” stated Bill Miller, President, and CEO of the American Gaming Association.

Miller, who noted that at the moment 13 states around the country legalized sports betting, revealed that 1 in 5 Americans can now place wagers in their own state with regulated markets. In addition, he said that due to that fact there is an increase visitation to retail sportsbooks at casinos while the American population has expressed an 8% increase in sports betting online.

New Jersey and Pennsylvania Are the Most Advanced States in Wagering

As a reminder, the Supreme Court repealed PASPA last year and ever since 13 of the states across the country have decided to legalize sports betting while a few more have passed legislation. The most advanced states regarding sports betting are considered to be New Jersey and Pennsylvania where the betting industry is already accepted as another way of entertainment by a large amount of the population. Furthermore, New Jersey and Pennsylvania are some of the few states which support online sports betting and are the only states which are home to NFL franchises as well as retail and mobile wagering.

Miller stated that the reason why the American Gaming Association is striving to legalize sports betting all around the country is because of a number of reasons. However, the most important reasons are eliminating the black market, increasing customer protections as well as protecting the integrity of the game.

If all this is taken into consideration, then there would be no wonder if more of the states decide to follow the path of New Jersey and Pennsylvania and provide their citizens the opportunity to place a sports bet on their favorite team in a legal and safe way.