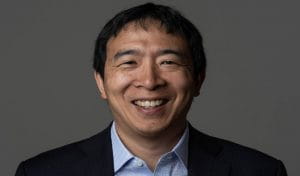 “Online poker is legal in 4 states. The state-by-state rules are variable and push many players to offshore sites. We should clarify the rules and make it legal in all 50 states. US players and companies would benefit and new tax revenues could be used to mitigate addiction” – stated the 44-year-old Democratic presidential candidate, philanthropist, lawyer and entrepreneur in a tweet posted on his official Twitter account.

The tweet instantly went viral and received over 36,000 likes – something that confirmed that Yang definitely won the hearts of thousands of people, players or supporters of online poker. Truth to be told, Andrew Yang is the first Presidental candidate from the two major parties in the U.S. to openly show his support and ambition for nationwide poker legalization compared to other candidates who decided to leave this issue to be solved by individual states.

Yah Has 20-1 Shot to Win the Next Presidential Elections

Andrew Yang strives to challenge Donald Trump in the next year’s presidential elections in the U.S., but first, he needs to stand out amongst the rest of Democratic candidates who are also equally good and popular as him.

In fact, according to Oddshark Yang has a 20-1 shot to win the 2020 presidential elections at a current moment while he had 15-1 shot just a month ago.

Yang is a founder of Venture For America, a nonprofit organization whose main objective is to create jobs in economically struggling cities, therefore, winning the presidential election is not the only challenge Yang has in front of him.

Nevertheless, it is a matter of fact that Yang definitely won the support of many people who love online poker despite the fact that Poker is not that wide niche and it probably wouldn’t bring him that much of voters.

Bill Perkins, an American hedge fund manager and perhaps the wealthiest poker player, was the first one to show his support to Yang’s tweet about online poker. Perkins in his tweet encouraged Americans to put Yang in the White House.

Another famous person who showed his great support to Yang was also Daniel Negrenau, a Canadian professional poker player, by tweeting that Yang might be the guy for the poker players who want the freedom to play poker from their home.

There were a few other prominent figures in the world of poker who did not miss the opportunity to show the support of the tweet of the 44-year-old Democratic candidate who, as already mentioned, is the only candidate from either major parties in the politics of U.S. that encourages nationwide legalization of online poker.

Nevertheless, although Yang already won the hearts of the poker community in the country, he still has a long road to walk in case he wins the Democratic nomination.