The following are the best daily fantasy tight end plays for week 12 of the NFL season. Tight end is the thinnest position in fantasy football these days, but here are the top options in a scarce market. 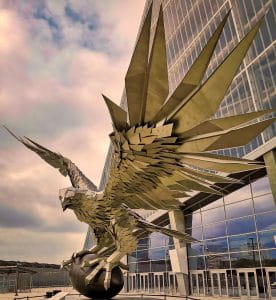 A statue of a falcon outside of Mercedes Benz Stadium © Thomas H. from Pixabay

Zac Ertz came into the 2019 season with high expectations and was widely-considered a top three fantasy tight end along with Travis Kelce of the Kansas City Chiefs and George Kittle of the San Francisco 49ers. The first several games were disappointing for the most part. In the first eight games Ertz never topped more than 72 receiving yards and only scored one touchdown.

However, Ertz has come on strong the last two weeks. He was targeted 11 times in both games and caught nine passes in each of them as well. He also went for 103 and 94 receiving yards in those contests. In week 12, he’ll be facing the Seattle Seahawks. The “Legion of Boom” era is over and the Seahawks’ secondary and linebackers don’t defend the tight end position quite like they used to as they’re allowing the 7th-most fantasy points to tight ends this season.

George Kittle would be considered the top tight end play for week 12 if it weren’t for a knee injury. He’s currently listed as “questionable” to play on Sunday and was “limited” in practice leading up to the game. Kittle is the star of the 49ers’ passing attack and is targeted more often than any of the team’s wide receivers, when healthy.

He missed the last two games due to this injury but is hoping to play against the Green Bay Packers in a prime-time Sunday night matchup. The Packers have allowed the 6th-most fantasy points to tight ends so it’s a good spot for Kittle to get healthy.

Darren Waller is having a breakout season. His numbers aren’t overly remarkable tight ends but the position is so thin from a fantasy perspective people have taken notice. Back in week 7, he exploded against the Packers for 126 yards and two touchdowns. He hasn’t approached that level of production in any other games this season but Raiders’ quarterback Derek Carr does target Waller on a consistent basis. In six of the last seven games Waller has been targeted at least five times.

With his athleticism and volume, there’s potential for chunk yardage plays, which means big fantasy points. In week 12, he’ll be facing the lowly New York Jets who also have to fly cross-country for the game. Waller is a solid play this week.

The Atlanta Falcons are having an awful season as their 3-7 record indicates. However, they’ve won two games in a row and Austin Hooper is having his best season as a pro. He’s caught touchdown passes in four consecutive games and will likely be selected to the Pro Bowl.

Hooper has an ideal matchup in week 12 against the Tampa Bay Buccaneers. The Bucs’ pass defense has been poor covering wide receivers and even worse defending tight ends. Entering week 12, Tampa Bay has allowed the 2nd-most fantasy points to tight ends so expect another big day from Hooper.