The former vice-president Joe Biden spoke out regarding the restrictions on which the gaming industry is being exposed and stated that he is opposed to the “unnecessary restrictions”. Particularly he spoke out referring to the Department of Justice opinion from a while ago that sought to broadly apply the Wire Act to all forms of interstate gambling. Moreover, the opinion of the Department of Justice at a current moment is subject to legal action after Paul Barbadoro, US District Court Judge mentioned that, based on the context of the law, a broader reading of the Wire Act that would extend only to sports betting. 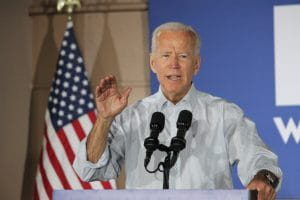 In a statement to the CDC Gaming Reports, Biden made his latest comments. The former vice-president said to CDC that he does not support unnecessary restrictions to the gaming industry like the ones which were done by the Trump administration.

That would seem to include decisions such as the interpretation of the Wire Act from the DOJ’s Legal Counsel Office, which reversed the same office’s 2011 opinion. In that view, the DOJ found that both the grammar and the law’s intention showed that it was intended to only apply to sports betting.

In fact, Biden has already addressed the issue in previous situations.

“I would reverse the White House opinion that was then reversed and overruled by the court,” stated him in an event in Nevada via Online Poker Report. “The court is correct. That should be the prevailing position.”

Nevertheless, the Department of Justice led by judge Barbadoro is already working to file its appellant’s brief with the First Circuit Court of Appeals. The deadline was first set by November 12, however, it was then extended until December 30.

On top of that, the filling will open a new set of deadlines because it will give the New Hampshire Lottery Commission an opportunity to respond to the Department of Justice while the Department of Justice will then have the opportunity to give its own perspective of that response. Moreover, it is predicted that the oral discussion regarding this matter might be delayed until 2020 and even be heard by the Supreme Court.

Biden spoke regarding the proposal that would provide a federal legal basis for sports betting introduced by Senators Chuck Schumer and Mitt Romney. Biden assured CDC Gaming Reports that he believes that states and federal authorities will work together to ensure that gaming is secure, fair and free of bribery. Nevertheless, he still hasn’t opened up whether he is pro or against the bill.

Biden Is Not the Only Democratic Candidate to Support Gambling

Despite the fact that Joe Biden is at a current moment the most popular candidate in the race for the Democratic presidential nomination, he is not the only Democratic candidate that has given his opinion regarding online gaming in the United States. Andrew Yang, the 6th most popular candidate in the Democratic presidential nomination race, openly showed his support for online gaming. Moreover, he stated that he would love to see online poker legalized in all 50 states and immediately won the hearts of the gambling community around the country.