A $2 million guaranteed poker competition scheduled at the new Champions Club in Dallas was canceled by the council after the owners of the club faced unforeseen challenges opening their new premises. The tournament, officially planned for September, can be considered one of the biggest poker tournaments in Texas poker history. 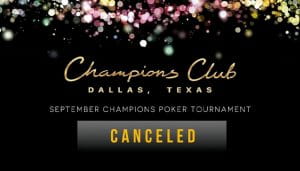 Last week, Champions Poker Club stated the cancellation in a short message on Facebook. The $ 1,700 multi-day flight was said to begin on Tuesday, September 14th. The tournament was expected to run for a week and conclude next Tuesday, September 21st.

Champions Club Dallas said in an announcement; they are disappointed to announce that their Sep Dallas Poker Tournament has been called off; The Dallas Champions Club will open this year and be full of fun.

The Dallas Champions Club is affiliated with a similar company that presently improves its Houston operations. The Houston club hosted a successful million-dollar tournament in April and May as part of the first Lone Star Poker Series. The main event broke its guarantees and created a prize pool of $ 2,090,700. This primary tournament reached such a high number, among other things, thanks to the distribution of about 150 places in different giveaways and campaigns.

The company also signed an agreement with poker marketing and talent agency Above the Felt, which provided the Lone Star Poker Series a much-needed boost by inviting Chris Moneymaker, Darren Elias, and Matt Burkee to the primary tournament.

Although the achievement of the most significant event won by June Park, potential economic challenges for the Houston club (the first in the champion group) may have contributed to its closure in a month.

The final sit and go at this club was on May 27th. The club also affirmed in a different article that he is in search of a new place in Houston and his correct holding position remains obscure.

The Club Faces Opposition From Residents

Even though about 100 poker rooms are running in Texas, many of them are not fully operational. The Champions Club will be positioned in an old hotel near North Dallas Parkway. The private club is anticipated to start this year and be open 24/7, but not everybody is happy with the venue’s plan.

The potential economic problems associated with the Lone Star primary tournament are not all the champions of the horde face. The intended Dallas club faced critical obstacles in the form of complaints from residents. According to Channel 5, a subsidiary of Dallas NBC, residents are not happy that the club wants to offer 24/7 poker.

In addition, many opponents recently took part in a protest against the club, and a landowners association’s appeal on the club has garnered nearly 1,000 signatures. According to a resident, this will be a 24/7 poker room, and they are confident that it is not part of the area.