As of August 27, 2019, Chinook Winds Casino Resort became the first and only legal sportsbook on the West Coast. It’s located in Lincoln City, Oregon, a beach town with a population just under 9,000 residents, and it’s now home to the only place within 500 miles to offer licensed sports betting. Ready to pack your bags and head up the Pacific Coastal Highway? Here’s everything you need to know about a major first for the region. 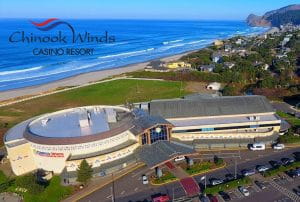 The First Sportsbook on the West Coast

The brick-and-mortar sportsbook is accessible only for in-person bets, with no (announced) plans for a mobile app platform, even for those who register in person. This means that would-be sports bettors need to travel to the location to both place bets and receive winnings. If casino players felt that they were limited by geography, West Coast punters hoping to play at a licensed sportsbook take the cake.

Chinook Winds’ Director of Casino Operations Will Robertson explicitly stated: “All of our wagering will be done in person. We will have no online wagering options.” So if there was any hope of a mobile or online option for Oregon sports bettors, Will Robertson pre-emptively put it to rest. Perhaps a competitor will open and offer an online version.

But if you do make the trip—and since it’s the first, it’s arguably historic—you can expect to bet on both college and professional level sports. The plush lounge will have food, drinks, games, and stats, and the first bets will be placed just a couple weeks before the kick off of the 2019 NFL season.

What’s particularly striking about their distinction of the first West Coast sportsbook is their location directly along the Pacific Ocean. As a beacon of what’s to come for sports betting on this side of the country, it will be interesting to watch its development – and what it inspires for competition.

Could West Coasters Bet on Sports Before Chinook Winds?

Legal sports betting is still absent from Washington and California, so a trip to Las Vegas, Reno, or another gambling hub was necessary if you’re strictly a legal bettor. However, hundreds of offshore online sportsbooks service all three states, so anyone willing to bet with a (legitimate but unlicensed in the US) online sportsbooks could do so for more than two decades. And that’s still the case.

Is Chinook Winds Worth Traveling For?

The biggest consumer markets near Lincoln City, Oregon, are its neighbouring states of Washington and California. Both border states have some of the highest per capita wealth in the country, and the first sportsbook could inspire some visits from out-of-towners. However, the competition, even in the limited sports betting world, is steep.