Colombia’s gambling regulator, Coljuegos, has kicked off a new campaign to spread awareness of the nation’s gambling laws, alongside the 2019 Copa America tournament in Brazil. The competition got underway on Friday and is likely to attract huge betting interest in the Colombian sports betting market, which is one of the newest in South America. Last year, Colombian football fans wagered more than £45 million during the World Cup held in Russia, and the early success of the Colombian team, which beat Argentina in their opening game on Saturday, is likely to fuel higher levels of betting interest as the tournament continues. The campaign is called #LaJugadaPerfecta, or ‘the perfect game’ and its aim, according to the President of Coljeugos, Juan Perez Hidalgo, is to encourage sports betting fans to use one of the country’s seventeen licensed sports betting companies, rather than unlicensed operators. 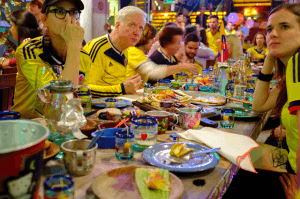 The Copa America is hugely popular in Colombia © Pexels

The Colombian online sports betting market has seen remarkable growth since it was established in 2017. It is now one of the leading players in the continent’s sports betting industry, and other nations in the region are following its lead. To maintain its competitive advantage, Coljuegos has been focused on expanding and protecting the regulatory framework that underpins the industry and has been working on supporting the introduction of virtual sports and live casino betting.

But as the market grows, the threat of unlicensed operators has also been looming large on Coljuegos’ radar, and not just because illegal gambling operations threaten the reputation of the industry. They are also a threat to the flow of tax revenue generated by Colombian betting.

During the course of 2018, it has been estimated that Colombians gambled as much as £439 million online, and in turn, gambling operators paid £9.2 million in revenue to the Colombian government, most of which was diverted to the Colombian healthcare system.

And that figure represents just a part of the Colombian gambling industry. It has been estimated that tax receipts from casinos, bingo halls and lottery games has been worth £1.99 billion over the last six years. Casinos and bingo halls have contributed as much as £1.19 billion to government coffers, while popular games Baloto-Revancha and Superstar, have also made significant contributions. But this vital revenue is threatened by illegal operators that pay no tax, provide no protection for customers and are often linked to organised crime, both at home and abroad.

Under Hidalgo, Coljuegos has been active in cracking down on unlicensed gambling, working with operators, law enforcement, legal organisations and government to target illegal operations.

During 2018, Coljuegos co-operated closely with both the Colombian Tax Directorate and the Federal Police in a joint task force that was able to block over 2,500 illegal online sites and shut down 3,000 black market gambling premises. In fact, during his tenure as President, Coljeugos claims to have played a role in the seizure of more than 20,000 illegal gambling machines, along with the closure of 419 unlicensed websites offering gambling services to Colombian players, and a number of arrests.

Hidalgo, and Coljeugos will be hoping that #LaJugadaPerfecta can complement their enforcement work by persuading Colombians to avoid black market gambling operations, as the nation aims to protect its competitive advantage in the fast-growing South American betting market.