Just a few days ago, Oklahoma’s Governor, Kevin Stitt, spoke about his discussion about a potential deal with a commercial gaming operator and tribal leaders immediately opposed to it. According to them, a competition to Oklahoma would be breaking the agreement they have with the state. 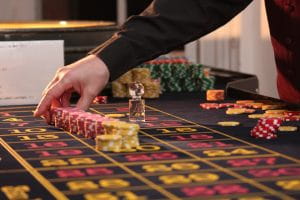 Man in a casino © Whekevi/Pixabay

The Governor mentioned that commercial gaming operators themselves have shown interest in Oklahoma’s market, adding that the operator, which is not yet known to the public, offered to sign an 18 percent deal for opening up a shop in Kansas, one of the strongest gaming regions in the United States.

“Commercial operators are reading the news headlines in our papers, and in industry trade publications, and they are wanting a chance to break into the third-largest casino market in the nation,” – explained governor Stitt.

Tribal Leaders Oppose The Statement of the Governor Stitt

Tribal leaders, though, said that without the legislative process, commercial gaming could not make it into the territory. Matthew Morgan, the Chairman of the Oklahoma Indian Gaming Association said that that is currently banned under state law. He also added that the Governor does not have the power to provide purely legal gaming and therefore, it would have to be a state action through the legislative body and then come up with him for signature.

On top of that, Stephen Greetham, the senior counsel whose Indian gaming operator is the biggest one in the state, mentioned that the compacts renew and that their gaming will be as lawful in January 2020 as it is in December 2019. He even added that Governor Stitt’s position is not supported by law, logic or the compact’s plain language.

This issue arises after a years-long debate over the 15-year Gaming Agreement between the State of Oklahoma and the Tribes. The deal’s first term ends on January 1, 2020.

However, despite the fact that Governor Stitt believes that the contract expires, tribal leaders disagree and believe the automatic renewal of the compacts. Governor Stitt wants to pay more for preferential privileges for tribal people. Moreover, he also wants to add divisive wording that compacts to explicitly state what is going to happen in 15 years.

Ross Swimmer, a Democrat and Cherokee resident who directed the Indian Affairs Bureau during a critical time, shares the tribal opinion. He opinioned in a letter published by The Tulsa World that the tribes will renew the agreement and therefore, there is no need for either party to spend a significant amount of money on the court. He believes that Governor Stitt should be open for discussion.

Nevertheless, when taken into consideration that the Governor previously has spoken that the tribes should share 25 percent of their revenue instead of 18 percent as they are doing now, this statement made by him regarding the potential competitor of the tribes could be even taken as a threat. In addition, Governor Stitt said that he would not like to talk about Class III gaming compact negotiations in public.

The situation still remains to be unsolved and it seems to continue being like that until in January next year when the contract is supposed to be renewed.