The following at the best daily fantasy options at tight end for week 16 of the NFL season: 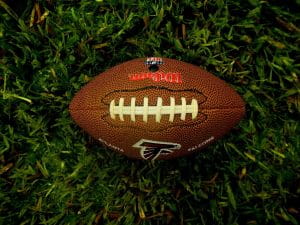 A football with an Atlanta Falcons logo © Ernesto Rodriguez from Pixabay

Jacob Hollister is not a familiar name and he had not been a particularly elite fantasy option for the tight end position this season. In week 15, he only had three catches for 23 yards. However, in week 16, he’ll be facing the Arizona Cardinals who have been by far the absolute worst team in the NFL at defending tight ends.

George Kittle is coming off a monster game against the Atlanta Falcons when 49ers quarterback Jimmy Garrapolo threw the ball his way 17 times, and Kittle caught 13 of them for 134 receiving yards which accounted for 67 percent of the team’s yards through the air. Kittle is far and away the number one receiving option for the 49ers and they’ll be sure to get him heavily involved against the Rams. Through 15 weeks, Kittle has the highest season grade ever for a tight end from the analytics website Pro Football Focus.

Austin Hooper has quietly put together a productive season with over 60 catches and over 600 yards through the first 15 weeks. In week 16, he’ll face the Jacksonville Jaguars who are about average at defending tight ends from a fantasy perspective. However, the Falcons have suffered some injuries in their receiving corps. That should mean additional opportunities for Hooper against a Jacksonville team that has lost five of its last six games.

Over the last two games Zac Ertz has been targeted 23 times resulting in over 150 receiving yards and three touchdowns. While he’s a talented tight end this can also be attributed to volume. The Eagles have lost wide receivers Alshon Jeffrey, Nelson Agholor, and DeSean Jackson to injury. Two weeks ago against the New York Giants they were down to Greg Ward as the only healthy wide receiver on their roster.

Ertz is basically the only experienced threat the Eagles have currently healthy in their passing game. They’ll be facing the Dallas Cowboys in week 16 in a game that may decide which team wins the NFC East title and goes onto the playoffs. The Cowboys’ are 7th-worst at allowing fantasy points to tight ends this season so Ertz should see a ton of balls thrown his way in this matchup.

In week 15, Travis Kelce became the first tight end in NFL history to top 1,000 yards receiving in four consecutive seasons. He’s having another Pro Bowl-caliber year and in week 16 he’ll be facing the Chicago Bears. The Bears allow the 10th-most fantasy points to tight ends and will be without linebacker Roquan Smith, who is often responsible for covering tight ends but is out for the season with a pectoral injury making Kelce a great fantasy play this week.