Though the concept of virtual reality casinos is currently in its embryonic stages, some developers are aiming to stay ahead of the game. SlotsMillion was the first to launch a fully immersive casino experience back in 2016. 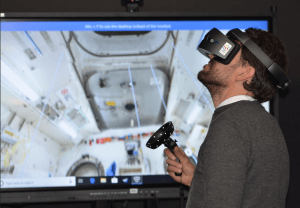 Designed specifically for the Oculus Rift, the SlotsMillion VR casino is located on the eightieth floor of a skyscraper. Players are able to interact with others as well as their surroundings, choose from a wide range of games and gamble for real money. Some have even mentioned experiencing a bit of lightheadedness as they gazed out the casino’s windows at the city below.

SlotsMillion received a great deal of praise for its groundbreaking advancements at the 2016 eGaming Review Operator, Marketing and Innovation Awards shortly after the release of its VR gambling platform. In regard to the recognition, Co-Founder, Alexandre Tomic said, in part, “While many operators are taking a wait-and-see approach to virtual reality, we decided to throw caution to the wind and just jump in because we wanted to imagine the future of the online casino industry.”

Another frontrunner in this segment is casino software development company, CasExe, which has launched its own VR casino. Industry leaders, Microgaming and NetEnt have released VR versions of roulette and slots respectively.

Gamers in the online gambling sector spent more than $45 billion during the last year for which information has been made available. While projections from online data portal, Statista place this figure at $94 billion by 2024, market analysts predict the incorporation of VR could add $520 million or more to the annual totals within the next couple years.

Not everyone is buying into such an optimistic forecast for virtual reality gambling. Naysayers have been quick to point out lower-than-expected consumer interest in VR headsets alone could put a damper on industry growth. Those on the other side of the fence argue the lack of interest in VR stems from a shortage of new content for such devices.

While the joining of online gambling and VR technology could spark higher sales for the Oculus Rift and its counterparts, those hoping to cash in on this budding market niche also face a number of other hurdles.

Varying regulations are among the most significant roadblocks as online gambling remains illegal in many areas and the ones having legalized the activity have their own agendas in mind. Sources indicate SlotsMillion representatives spent seven months hashing out regulatory details with officials in Malta where the company is based.

Gamers’ security and that of VR casino owners and operators is likewise a major concern. With millions of online accounts already being at risk and such potentially large amounts of money exchanging hands, authorities are leery of adding yet another layer to the industry.

As noted in a recent Forbes writeup, blockchain may be the answer to the security dilemma. Online casinos could deal in already-established cryptocurrencies or create their own in-game tokens. Since cryptocurrencies are decentralized and a number of countries have yet to outlaw their use, this could also be a feasible way to legally circumvent certain gambling restrictions.

An estimated 1.6 billion people participate in online gambling at present and more than 2 billion play online games. As VR technology continues to improve and lend itself to the fully immersive gambling experience, these sectors could certainly propel one another to new heights during the years to come.