Dallas Cowboys’ star running back Ezekiel Elliot is holding out for a new contract. He is headed into the final two years of his rookie deal and believes he deserves to be compensated fairly for becoming a legitimate superstar. That designation is undisputable as by age 24 he’s already led the NFL in rushing two of his three seasons and twice been named an All-Pro. Last season Elliot led the NFL with 1,434 rushing yards with a base salary of $2,718,758. 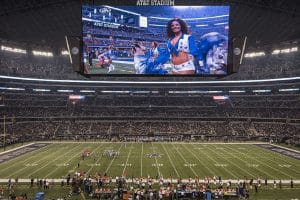 AT&T Stadium, the home-field of the Dallas Cowboys © skeeze from Pixabay

Los Angeles Rams’ running back Todd Gurley is a player of similar stature and ability who was drafted the year before Elliot. Through four seasons Gurley has earned about $8 million per season while Elliot has earned under $7 million. In addition, the Rams have rewarded Gurley with a contract extension, and the Cowboys have yet to do so with Elliot. For the 2018 season, Gurley had 1,218 rushing yards compared to 1,434 for Elliot.

The Dallas Cowboys are projected by many to be Super Bowl contenders. They won 7 of their last 8 games last season, winning their division and qualifying for the playoffs. They defeated the Seattle Seahawks in the wild card round before losing to the Los Angeles Rams, who eventually lost in the Super Bowl.

Current betting lines indicate the Cowboys are in the discussion to contend for the Super Bowl, but if one of their best players doesn’t play due to a contract dispute the lines will fluctuate. Cowboys’ owner Jerry Jones believes the team can win it all without Elliot’s contributions. He told NBC Sports, “The point there is, you don’t have to have a rushing champion to win a Super Bowl.”

Most sportsbooks currently have the Cowboys between 20-1 and 25-1 odds to win the Super Bowl. Should Elliot follow through on his threat to not play this season those odds could increase as high as 80-1. Las Vegas oddsmakers view Elliot’s contributions as far more valuable than Mr. Jones does. Dallas signed veteran running back Alfred Morris as insurance should Elliot sit out. Morris played 14 games for the Cowboys in 2017, rushing for 547 yards and one touchdown. SportsLine calculates the Elliot-to-Morris drop-off as being worth 1.2 wins, which could be the difference in qualifying for the playoffs. The current over-under on the Cowboys win total is set at 9, which puts them on the fringe of the playoffs. Without Elliot, if a 7.8 win total proves to be an accurate projection the Cowboys are in trouble, as only 10 of 348 playoff teams under the NFL’s current playoff format qualified by winning 8 games or less.

Against The Spread and Futures aren’t the only types of gambling affected by Elliot’s holdout. In season-long and daily fantasy games, Elliot is among the most valuable players in the NFL. Before his holdout, Elliot was considered by many to be the top overall pick in fantasy football this season. Most sources of fantasy football data list Elliot’s average draft position in early July between 1.02 and 1.04. Since then he announced his refusal to pay without a new contract in addition to traveling to Cabo San Luis, Mexico, to train on his own instead of with the team in Oxnard, California. His average draft position reflects people becoming hesitant to invest a high pick on him as it’s fallen to 1.06 to 1.09.