NBA2K20 Toes The Line On Gambling

Many gamers often complain about sports games released on a yearly basis that insufficient new features are added. NBA 2K20 made a controversial change to the MyTeam mode. A trailer for the latest version of the game strongly resembles a video gaming machine filled with bright colors, slot machines, and prizes. 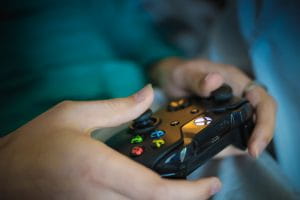 An Xbox One video game controller © Olya Adamovich from Pixabay

The trailer has created controversy because neither the North American ERSB or the European PEGI flagged the game for gambling. They are the two major agencies for video game ratings in their respective regions. The game is currently rated playable for children ages three and older. The only content warnings for the game are in reference to mild language.

There are already many existing video games which contain gambling minigames and loot boxes. The game being labeled as gambling would reduce the amount of people it’s deemed appropriate for, diminishing the number of customers as well. A gambling label on NBA 2K20 would mean reconsidering the ratings for several other popular games.

PEGI’s position aligns with ERSM but acknowledged the controversy in a statement to Eurogamer by saying they’d, “Seen the announcement trailer of NBA 2K20 and noticed the controversy it caused.” However, in their estimation the new features do not encourage gambling by adding the game doesn’t, “encourage and/or teach the use of games of chance that are played/carried out as a traditional means of gambling.”

A Gambling Label Would Face Opposition

Take Two Interactive, the company behind NBA 2K20 would put up a fight if ERSB and PEGI changed its rating. They’d have allies on their side as other video game companies would be impacted. Other sports video games contain similar features including those produced by video game giant EA Sports, responsible for the immensely popular Madden and FIFA series of games.

PEGI did concede that standards for gambling within games could change in the future and that NBA 2K20 does test boundaries by also telling Eurogamer, “We are very aware that it may get too close for comfort for some people and that is part of an internal discussion that PEGI is having at the moment. The games industry is constantly evolving. As a rating organization we need to ensure that these developments are reflected in our classification criteria.”

ERSB is unlikely to reconsider its position anytime soon. They’ve been rating video games for 25 years and have consistently maintained these types of minigames don’t even qualify as minigames. That, in addition to the opposition they’d face makes it highly unlikely for these games to be labeled for gambling in North America anytime soon.

NBA 2K20 will be released on September 6th, on the platforms of Nintendo Switch, PC, PlayStation 4, and Xbox One.