Goodbye Masks and Distancing, Johnson Announced to Reopen the UK Despite the Delta Variant

Despite cases of Covid-19, which are on the rise, the British Prime Minister announces the imminent lifting of the restrictions. 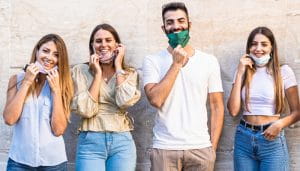 After having postponed for the first time, in mid-June, the lifting of the last anti-Covid-19 restrictions, Boris Johnson decided not to give up any longer the general relaxation: Monday, at the end of the afternoon, the first British Conservative Minister has decided to reopen everything from July 19.

In less than two weeks, England will return to pre-coronavirus society, despite rising infection rates.

The mouth mask obligations are gone, and so are the distance rules. The entertainment sector can receive full halls again, the nightclubs will open again, and you can hang out at the bar again in a cafe. From July 19, almost all domestic corona rules will disappear, British Prime Minister Johnson announced Monday evening. Restrictions will remain for travelers to and from abroad. The relaxation only applies to England. Scotland, Wales, and Northern Ireland are responsible for their own corona rules.

According to the British Prime Minister, the holiday season is the ideal time to return to freedom and “learn to live with Covid.” Better to do this now than in the winter, he explains.

But here is the big question: will rapidly rising infections also lead to massive hospitalizations?

Several scientists are very concerned about the “big bang” reopening, as the number of corona infections is rising rapidly.

The entire United Kingdom is currently facing 27,000 infections per day. It is forecast to rise rapidly to 50,000 in the coming weeks, and 100,000 per day in August, due to the rapid spread of the much-discussed Delta variant.

In contrast, the UK is one of the frontrunners in vaccination: 86 percent of adults received at least one shot, 64 percent are fully vaccinated. A large part of the population is thus at least partially protected from the worst effects of Covid-19.

The fact that mouth masks will no longer be mandatory on public transport, including the London Underground, has led to strong reactions.

Johnson emphasized that common sense should prevail here. There is a big difference between a full subway and sitting alone in a subway late at night. They need to get rid of universal government dictates and rely more on the personal responsibility of citizens, he said.

That will not work, fear several mayors, including Manchester. They fear that if the government no longer requires mouth masks, all discipline will disappear. It can also lead to quarrels among passengers between supporters and opponents of mouth masks.

It is especially looking forward to what the arrangement on the London Underground will be. Sadiq Khan, the mayor of London, says he will discuss the matter with transport companies before taking our next steps.