Recent reports from the footballing world caught many by surprise when Hamilton Accies’ head coach, Brian Rice, confirmed that he had been engaging in gambling activity. 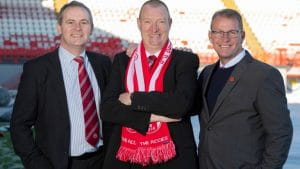 According to the Scottish Football Association’s regulations, no football player, coach, Staff, Manager, club or any other team official under the SFA jurisdiction should gamble on a football match. The contrary of this would be in violation of disciplinary Act 31 which Rice faces.

Rice, who had earlier admitted to his struggle with gambling addiction, is facing five similar charges for each season from 14th July 2015 to 15th July 2019 in a hearing scheduled for 30th January 2020.

“I would like to express my regret to the players, coaching staff, and my friends and colleagues,” he remarked.

Rice, who featured as a midfielder for Hibernian, Nottingham Forest and Falkirk, became Accies’ head coach in January 2019. He currently faces a match ban of between 3 to 16 matches and a £100,000 fine.

The player is full of remorse and seeks help and support from all stakeholders including the Scottish Football Association.

“This decision was one of the hardest I have had to take, but in a way also the easiest,” he commented. “I have made no secret of the fact that I have struggled with the disease that is gambling addiction in the past. The reality is I am an addict and, while I have been proud of the fact I have been in recovery from this disease, a key part of the recovery program is honesty. Honesty to myself and honesty to those who have and who continue to support me, including my family and my football family at Hamilton,” he added.

Rice further attests that the fight against gambling addiction is more complicated than said and hopes that many more victims out there can access the help needed. “After committing to recovery, I cannot believe that I have found myself back in the grip of gambling addiction, but this disease is not cured with a finite course of treatment,” he went on to add.

Despite the confirmation, Hamilton’s board swung their support to Brian Rice praising him for his courage in self-reporting and seeking help. This act caught the attention of the conservative MSP Ruth Davidson who commended the action of bravery and apportioned the blame to the government for not taking gambling effects such as addiction with the seriousness it deserves.

Will Japan Delay the Legalization of Casino Resorts?

The Japanese ‘Congress’ – Diet, resumes its 2020 session the week beginning on 20th January 2020 and many are hopeful for a positive outcome of gambling regulations bills. For some time now, gambling legalization has split the Japanese parliament into two wild factions. Prime Minister Abe’s majority Liberal Democratic Party (LDP) supports the legalization of casino resorts while the opposition firmly opposes the move.

The complexity of the situation was fully visible on Monday, 20th January, when Abe’s opening speech was interrupted more than a dozen times by the opposition after he introduced the topic on legalization of casino resorts.

On 25th December 2019, the credibility of the legalization proposal dwindled after the former cabinet minister Tsukasa Akimoto was apprehended on gambling-related corruption allegations. Akimoto, who was Abe’s member of the cabinet, was accused of receiving a bribe of more than $30,000 from the Chinese online betting company 500.com

Despite the opposition protests, Abe’s ruling party has the simple majority in parliament and they are confident of getting the bill through.

According to a gambling analyst, the Japanese gaming market is an untapped goldmine which could be worth more than $20 billion annually. However, this estimation largely depends on the public reception, of which 71% of the Japanese oppose the legalization of casino resorts.