How Close Is Chicago to Opening a Casino?

As reported by the Sun Times as recently as July 1, 2019, the Chicago casino looked like it could open by the end of 2020. But less than two months later, a study by Union Gaming Analytics (UGA), a Las Vegas-based company that released the study through the Illinois Gambling Board, stated that it’s unviable for casino operators to invest in a Chicago location.

Here are the three key reasons why there’s been a massive holdup, and where Chicagoans stand as the new year looms. 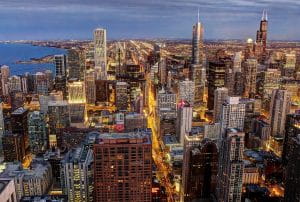 Is Chicago the future Las Vegas of the Midwest? Not for a while © Wikimedia Commons

According to the UGA report, the tax requirements and upfront costs on the current gambling bill would make profits “pennies on the dollar.” And that’s a best-case scenario result. Opening any business comes with risks, and taking on the risk with the knowledge that, at best, you’ll profit slightly, has turned off investors to a unreconcilable degree.

The untenable results of the study have forced Mayor Lori Lightfoot to reformulate the taxes in the current bill, which requires Illinois lawmaker approval. More details on that are covered in the last section below, but, spoiler alert, the newest iteration was not approved.

The uncertainty surrounding the payoff of opening a Chicago casino is exacerbated by the numbers of nearby Rivers Casino in Des Plaines, Illinois, which is located a five-minute drive away from Chicago’s extremely busy O’Hare International Airport. In fact, it’s easy to get to Rivers Casino from downtown via public transportation. Meanwhile, Rivers has seen a 62% downturn in revenue since its peak in 2005.

If the best-case initial scenario for a downtown Chicago casino is minimal profits—and if Rivers declining popularity is any additional indicator—a major tax overhaul is necessary for logical investing.

A Campaign Promise Is Up Against a Weak Tourism Draw

When campaigning for mayor in 2019, Lori Lightfoot made a campaign promise to bring economic opportunity to Chicago’s notoriously impoverished South and West sides. Part of that promise was opening the casino in those neighborhoods to bring jobs and attract tourism from across the city, state-wide, and beyond.

However, the UGA report highlighted how the South or West sides are likely to turn off would-be Chicago tourists. This is due to both the lack of esteemed entertainment venues, restaurants, and attractions in the areas, as well as the neighborhoods’ reputation for crime. A downtown location would, according to the report, draw the most tourism. But again, the tax structure isn’t agreeable in even the best of circumstances.

The Most Recent New Tax Formula Shot Down in Springfield

Mayor Lori Lightfoot went to the state capital to appeal for lighter tax requirements. Not only was the proposal shot down, but a separate fix to the bill included stricter background checks on operators, which is sure to further turn potential investors off.

So, to summarize, operators would have a tougher time receiving their license – and the same amount of trouble making a profit.

Is all lost? No. Despite the doom and gloom, there’s still hope. Illinois lawmakers meets again in January of 2020, where they can reconvene on the gambling tax bill yet. And if there’s going to be any forward movement on the upcoming Chicago casino, the Mayor needs a change in fortune.

Most likely, lawmakers will vote on another change to the tax scheme early next year. That basically puts Chicagoans in the same place they were in on Tuesday, November 12, 2019. Except now, they’ll have to wait months before there are any new developments.

In July of 2019, major newspapers were advertising the possibility of a Chicago casino as soon as 2020. But since the ground hasn’t even broken on the project (since a location hasn’t been determined yet), the launch won’t occur until at least 2021. And, unfortunately for would-be Chicago bettors, that’s yet another questionable best-case scenario.