Nevada is planning to reopen before June 4th, however, just like any part of the world it still won’t be the same as it used to be before the pandemic. Nevada Governor Steve Sisolak stated that local casino resorts will safely accept guests. 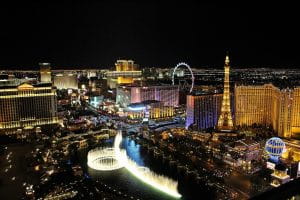 The fact that Las Vegas is going to be much different was also pointed out by a recent TV ad campaign which states that the world has changed, and Vegas is changing with it. That ad is a production of Las Vegas Convention & Visitors Authority (LVCVA), the marketing agency of Southern Nevada that back in a day created the remarkable ad “What happens in Vegas, stays in Vegas.”

The Chief Executive Officer of LCVA explained that the new ad is created with a purpose to remind tourists that Las Vegas is still the same location, though it may look slightly different

“People think of Las Vegas as an escape, and it can still be an escape from what everyone has had to go through over the last two-and-a-half or three months. Certain aspects won’t necessarily be what you’re used to, but you’ll absolutely be able to come and have a great time”- concluded him.

Nevada’s Governor Steve Sisolak also said something similar. He said that although they will take every precaution possible, Nevada is encouraging visitors to come, enjoy themselves and have a great time.

Nevertheless, the crucial thing about reopening Las Vegas lays in the reopening of hotels where tourists should stay. It is estimated that there are 150,000 hotel rooms in the Las Vegas Valley, however, not all of them will be available for the tourists as of June 4th. The situation with the casinos won’t be any different either.

Derek Stevens, the owner of both The D Las Vegas casino and the downtown Golden Gate Casino, is also considering to reopen his properties. However, Stevens did something that no other casino owner has done – he gave 1,000 free one-way tickets to Las Vegas in an attempt to attract tourists.

The tickets were given away in only 2 hours as tourists could find them on the website of D. Las Vegas. Stevens also confirmed that there was a high demand for Las Vegas and that only confirms that Las Vegas could be restored again.

All Properties Will Take Strict Measures

In addition, Rich Broome, spokesman of Caesars Entertainment, noted that most companies are taking a phased approach in reopening in order to decrease the risk of the spread of COVID 19.

All casinos that will be reopened will have sanitary stations. Moreover, they will also offer free face masks and some of them will even be with the logo of that specific casino. Some casinos will even have actual water, towers, and soap washing stations.

Wynn Resorts will even have thermal imaging cameras in order to detect those customers who have a fever at any entrance while the Venetian even has a team of 25 medical professionals who could help out in case that is needed.