The gambling capital of America is…New Jersey? Yes! Well, in terms of sports betting at least. Look out Reno and Las Vegas, Nevada, there’s a new gambling hub in the US. 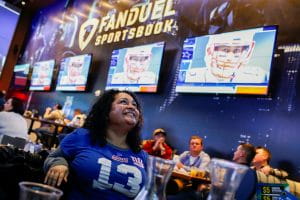 In May of 2019, New Jersey took in sports bets totaling $318.9 million, while Nevada raked in $318.3 million. That doesn’t sound like a big difference, except that folks could bet on sports in Nevada since 1949. Meanwhile, New Jersey legalized it just last year.

Proximity to (and Advertising in) America’s Largest Metro Areas

The New York City greater metropolitan area has a population of 20.3 million people, and the five biggest New Jersey cities fall within its borders. The total population of the state of Nevada, on the other hand, is just over 3 million people. While places like Las Vegas and Reno rely heavily on a steady stream of visiting tourists, they just can’t compete with that pool of potential customers.

Further, major sports betting companies are legally allowed to advertise to the greater NYC area. That means the largest urban consumer market in the United States is constantly inundated with commercials for FanDuel, DraftKings, and the like. In fact, you can see ads for it on the New York subway, which has routes that go straight to New Jersey. (If you’re in Manhattan, you can get to New Jersey in twenty minutes via subway.)

Then there’s Philadelphia, with a metro area population of more than 6 million. You can take a train that runs every thirty minutes from Philly to Newark, New Jersey, that takes under an hour. The drive often takes longer (although you still need to get to the train station). As the sixth-largest city in the US, Philadelphia is an extremely influential consumer market. As the largest city, New York makes an even bigger impact on market growth. And New Jersey is right there, poised to welcome the huge amount of revenue from out-of-state players.

Bettors Need to Be Inside New Jersey to Bet

To further encourage visitation and in-state gambling revenue, online sports sites and apps are required to verify the location of their users and block them from playing from outside the state’s borders. That means you can have the app on your phone and use it to gamble in New Jersey, but the second you leave the state, bets are blocked until you return.

Folks in Pennsylvania and New York who enjoy legal sports betting don’t have the option to play locally until their states legalize online sportsbooks. Their only option? To go with a legitimate (but unlicensed) offshore sportsbook that accepts US players, or make the trip to the Garden State.

Since legal sports betting (both online and in-person) is relatively new to New Jersey, the 2019-20 NFL season is about to kick off. Football is the most popular sport in America, making it a betting favorite among Americans. With the excitement surrounding the upcoming season in combination with increased advertising spending, New Jersey’s gambling revenue should just continue to grow – and outperform Nevada as they do.