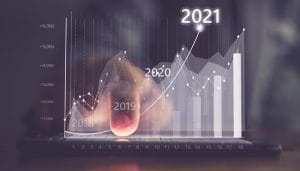 Paddy Power owner Flutter said his UK gambling revenues were up more than before COVID.

Gambling stores closed during the coronavirus, but as they reopened in June, the owner said UK retail sales were up 7% ahead of pre-pandemic sales.

Like its competitors, Flutter has seen significant improvement in online betting, with companies shutting down and the people forced to stay at home.

However, the helpline reported that the number of calls increased by 9% in the year to March.

And players returned to bookmakers after reopening as lockdown were eased in the second quarter, with casino sales up 7% above pre-COVID levels, he explained.

The number of users in the UK continues to grow, increasing by almost 60%.

By the end of March, the number of calls increased by 9%, according to a UK-based helpline.

CEO Peter Jackson stated that the first six months of 2021 surpassed his hopes as we made significant progress towards their strategic and operational goals while retaining great momentum to grow their player base.

Several countries worldwide were shut down casinos due to the COVID-19, and players turned their attention to the Internet.

According to Alistair Johnson, Flutter increases new users during lockouts and retained some in the first half of the year.

Research has shown that online betting flourished during the COVID-19 outage.

In the United Kingdom, Flutter said, which includes brands like Sky Betting & Gaming and Betfair, he had 59% more users than in 2019 before the COVID pandemic.

Overall, the average monthly customer base in the UK and Ireland increased 44% to 3.3 M users. It increased the earnings by 30%, so the average income per active user was lower.

Expansion to The US Market

Flutter has invested in its US operations and has spent over $ 1 billion to date promoting its flagship online gambling brand FanDuel.

According to him, sales in the United States in the first half of the year amounted to $ 900 million, which sets it apart from its main competitors.

On May 5, 2020, the betting giant purchased the Canadian betting company Stars Group.

According to the Freetrade analyst Gemma Boothroyd, the COVID-19 has helped online gambling and accelerated the digital transformation.

She also stated that the increase in the United States revenues, which rose 159% to £ 652 million, was driven by six other states that have legalized sports gambling. If vaccine availability increases and Flutter’s core markets return to the status quo, the company may not want to ease the closure.

According to the House of Lords report last year state that there is a third of a million bettors in the United Kingdom with some problems. There are mostly young people at risk.

Six of each problem player suffered from their performance. As a result, according to the report, two million users were affected by family separation, job loss, crime, loss of housing, and ultimately suicide.