The city of Chicago is betting on a substantial revenue stream from a new casino. However, they might have some competition from their neighbors to the east in Northwest Indiana. Spectacle Entertainment currently owns two riverboat casinos in Gary, Indiana, Majestic Star I and Majestic Star II. They announced plans to relocate those two casinos to a 40-acre site just off of Interstate 80/94, which connects Indiana and Illinois. Chicago has yet to determine the location of their casino but has narrowed it down to five prospective sites.

New Casinos On Both Sides Of The “Illiana” Border 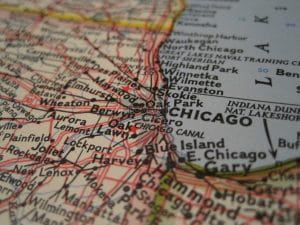 A map of Chicagoland and Northwest Indiana © Stephy from Pixabay

Illinois Governor J.B. Pritzker signed the bill permitting construction of the new casino just one month before Spectacle announcing the location for theirs. Spectacle is also partnering with Hard Rock for their new $400 million casino. One of Chicago’s prospective sites is less than 20 miles away from the new Indiana casino. The timing of these announcements does not appear to be a coincidence. The neighboring locations anticipate competing for business from gamblers and patrons who enjoy other types of entertainment the casinos will offer.

The new casino in Gary will be part of the Hard Rock brand and be the largest in Indiana. It will house more slot machines and table games than any gambling resort within the state. Also, it will have several bars and restaurants for guests to enjoy including a Hard Rock Café and a Hard Rock concert venue. Indiana casinos have been welcoming visitors from Illinois for many years and they’re pulling out all the stops to avoid losing those customers once the Illinois casino opens for business. Spectacle just purchased the casinos in 2018 and felt it was a necessity to join forces with Hard Rock to withstand the challenge from a competing casino in Illinois. John Keeler, general counsel for Spectacle told the Chicago Tribune, “Hard Rock is like the Rolls-Royce of casinos. One of the things we believe will help us compete is to move out of the water and into a good commercial location close by a well-traveled interstate.” He went onto concede, “The passage of Illinois legislation was a big part of the catalyst to partner up with Hard Rock.”

Spectacle also had their hand forced in terms of profits. The two casinos they operate are among the smallest of the 13 gambling resorts within Indiana. There are four Indiana casinos located in Gary and East Chicago, and all four have seen profits drop by over 20 percent the last decade.

Ed Feigenbaum is the director of Hannah News Service’s Indiana Gaming Insight told the Chicago Tribune, “The casinos aren’t doing so well. Thus, the reason for the sale of Gary Riverboats.

Indiana Casinos May Struggle To Compete

Some Illinois patrons have expressed concerns about the Indiana casinos deteriorating appearance over the years. Others may choose a local casino over the 25-minute drive on the Interstate. These concerns about the competition have caused Indiana casinos and legislatures to take a proactive approach. Indiana Governor Eric Holcomb signed a bill in May which will legalize sports gambling and gambling using mobile devices within the state.

Despite these proactive measures, many anticipate Indiana casinos will still lose customers to the new Illinois location. There’s even an example involving Indiana and another neighboring city, Cincinnati. Cincinnati residents had previously frequented casinos in Indiana until Ohio legalized gambling and the Indiana casinos in the part of the state near Cincinnati felt the impact. As more casinos are constructed and the market saturates, the competition among neighbors will continue to heat up. While this is potentially bad news for competing gambling facilities, it’s good news for patrons as casino resorts will have to improve the guests’ experience by offering enhanced amenities and entertainment options.