Shilton Was Worried He Would Lose His Wife

One of the most popular male players in England revealed that it took tens of thousands of pounds to lose before he could stop gambling. Former goalkeeper, Peter Shilton, has admitted he was a gambling addict for 45 years. 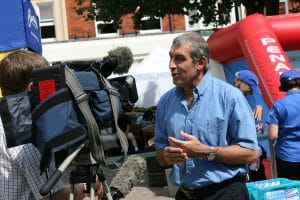 Shilton stated online gaming triggered his gambling addiction to escalate and that he chose to speak out after reports about the close connections between football and betting companies, 27 of the top 44 clubs to be more precise, in England now have a gambling business for their main sponsor.

He revealed that he told her that he is losing and that he is worried to lose her as well. Shilton went on to say online gambling is scary and he’s working with the government to create awareness of related issues such as mental health issues.

During his football career, he disclosed that he had wagered on horse racing and even acted as a bettor for his England teammates. However, his addiction got worse when he turned to look at online gambling, often doing so until the morning.

Shilton also said that he was such a passionate gambler that betting the company sent him hampers as a Christmas gift.

“I didn’t realize I was an addict until I finally stopped. When I was working I was always ultra-professional and nothing would interfere with the football. But when you’re a footballer you have a lot of spare time on your hands after training. It’s easy to sit around and gamble,” – said the goalkeeper.

He Used To Online Gamble All Night Long

On the other hand, the past week he and his wife had a meeting with sports minister Nigel Adams and the arts minister Helen Whately to have a discussion in regards to how to help address the threat of gambling problems.

In addition, he also cooperates with the charity Gambling with Lives which was founded by the gamblers ‘ bereaved parents.

The goalkeeper, who revealed that he won most of the things in his life when it comes to his career, but he has never won at gambling, mentioned that his gambling addiction reached its peak point when he realized that he would spend all night long betting and gambling on his laptop.

He Hold a Worldwide Record in Football

During his career, Shilton played in 11 clubs around the UK and even played in over 100 leagues for five clubs. The legendary goalkeeper at the moments holds the record for playing for the England men’s national football team more than anyone. During those times he earned 125 caps and even holds the record for most competitive appearance in world football of all times which is 1390.

While he was playing for Nottingham Forrest, the football legend won a number of honors such as the First Division championship, two European Cups, a UEFA Super Cup, and the Football League Cup.

Despite the fact that he did not make it to the World Cup until the age of 32, Shilton played in 17 finals matches and even has the record of 10 clean sheets in World Cup finals matches along with French goalkeeper Fabien Barthez.