Slowly but Surely, New York is Climbing the Gambling Ladder

Another New York casino offering sports betting, joins the nascent gambling industry. The Empire State, acquires with a new DraftKings sportsbook at the del Lago Casino & Resort in Waterloo. This will be the fifth legal sportsbook to be opened in New York, after the approval of the casinos to take bets on sports in their facilities. 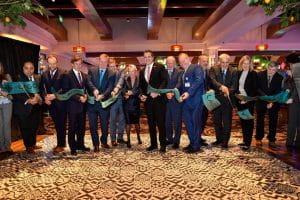 The opening ceremony at the del Lago Casino Resort © governorandrewcuomo/Flickr

What Does the New Venue Represent and Who Was on the Spot?

The sports gambling venue will offer 6,000 square feet with 23 wagering kiosks and cashier stations as well as bar and restaurant with seating for 200 people. A 1,000 feet LED video screen will broadcast sports events and 16 TV’s will lead the punters on their way to victory or failure. Television screens will be used to show scores and news tickers.

The grand opening was visited by many local officials and representatives from DraftKings and Del Lago including Donovan McNabb, who played for Syracuse University and quarterbacked for several teams in the NFL. He was one of the first to place bets in the opening ceremony. Brent Stevens, a chairman and managing partner at Peninsula Pacific which owns the casino said: “Look around. See all the jobs we’ve created. See all the economic development, all the ancillary businesses that serve del Lago Casino today. It’s only going to get better.”

Why is New York Behind with Sports Betting?

Almost six years after becoming legal, sports betting became real this summer with the launching of the first sportsbook at Rivers Casino in Schenectady. In-person wagering is offered by Rivers over the counter and via kiosk. Sadly, the sportsbook will not be open 24 hours but the kiosk will be at the fans disposal at all times. Tioga Downs in Nichols partnering with FanDuel opened shortly after the first one. Three Oneida Nation venues partnered with Caesars have also announced future openings.

The competition grows however, mobile wagering it’s not in the game yet. According to the senator Joseph Addabbo, New York is falling far behind the other US states in terms of mobile betting. Even though sports betting is legalized and taking baby steps to expand on a higher level, mobile betting is still prohibited. The state is constantly losing out on money to New Jersey and that can change only if the Governor, Joseph Cuomo approves. Supposedly, Governor Cuomo is not a fan of gambling and moreover on mobile gambling. It has been an ongoing battle in which the both sides stand firm in their position. While the rage is on, the residents of NY are travelling to New Jersey to place bets on their favorite teams because its closer and simpler. Addabbo is hoping to gain momentum and include the mobile betting in the next year’s budget.

In-person wagering is a big start for New York, its residents and politicians who stay optimistic for what is to come next. New Yorkers can now immerse themselves into the new betting experience and be content with what they have.