Sportpesa Set to End Its Contract With Everton FC

Everton’s partnership with Sportpesa is set to end at the end of the current season, according to reports released by Everton FC. Everton secured a 5 years deal with the East-African based gambling giant in 2017 but have both reached a mutual agreement for an early termination. The agreement was reached after Everton FC reviewed its future commercial goals and Sportpesa was not featured in it. 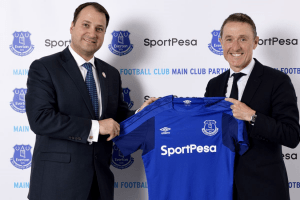 A club spokesperson said: “This has been a difficult decision but one that allows us to best deliver on our commercial plan and to grasp the new opportunities now open to us. “The club would like to thank SportPesa for all the work that has been done together. “Our partnership has seen our first team visit Africa on two occasions, as well as former players and club staff take part in numerous activations in the region.” On the other hand, SportPesa which has been struggling financially obliged to the move by Everton to terminate its contract with them.

SportPesa’s spokesman had this to say, “Following the statement released last night by Everton FC, SportPesa can confirm that its commercial arrangement with the club will conclude by mutual agreement at the end of the current season after a successful partnership. “We would like to thank Everton FC for their support, in particular for their valued input on an array of charitable projects in Africa. “We understand this agreement allows Everton to pursue a variety of other commercial arrangements for next season, which we note they are already doing.” The move leaves SportPesa with only Arsenal, HullCity and Southampton as their English based football club partners.

DraftKings has ventured into the state of Lowa by launching an online and mobile betting platform through a sportsbook app. Players will be required to register themselves at any of the three Wild Rose Casinos in the state personally until 1st January 2021 when it will shift to online registration. Matt Kalish, President and Co-Founder of DraftKings North America, said: “DraftKings has seen steady fan engagement in Iowa during the last few months at our three Wild Rose sportsbooks across the state, and we couldn’t be more excited to provide customers with our state-of-the-art mobile sports betting platform. “We have worked diligently to perfect our sportsbook product since it launched in 2018, and starting today, we’re proud to offer Iowans a safe and responsible place to wager on sports – one that can be accessed conveniently from the palm of their hands.”

Adrian Marsh has been declared the new CFO to William Hill granting him a seat in the company’s board. Marsh, who has been the CFO to DS Smith for the past 7 years, will add the new role to his growing accolades as he is also serving as the non-executive officer of the John Wood Groups and the chair of the company’s Audits committee.

Additionally, Marsh has served as the Group Director of Tax, Treasury and Corporate Finance of Tesco. William Hill’s CEO Ulrik Bengston said, “I am delighted to welcome Adrian to the Board. “As a proven CFO of an FTSE-listed company with M & A, deal execution and multi-sector finance experience in US & European markets, he will be able to make a significant contribution to William Hill in the enablement of the strategy and is a great addition to the team.” Marsh said: “I am extremely excited to be joining William Hill at such a key time in the company’s history and look forward to supporting Ulrik and the rest of board in delivering their growth plans for the future.” The official date of appointment is yet to be announced.