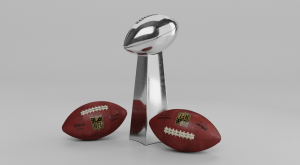 It’s unlikely that a broadcast watched by millions of all ages would mention her considering her line of work. It’s a poor value bet because “No” is virtually a lock.

Ah yes, the good old “idiot on the field.” Some like watching when a drunk fan runs onto the field. Some fans hate it. Everyone loves watching them get taken to the ground. There are four options for who will make the tackle if an idiot runs onto the field. Security is the favorite at +120 followed by an NFL player +175, and NFL team’s staff member +250, and another fan at +750.

Considering the magnitude and importance of the game it’s highly unlikely that a player would risk injury to make a tackle that doesn’t increase his team’s chances of winning. We’re going to go with security doing their job. It’s also an opportunity for them to shine bright on a big stage.

How Many Times Will President Donald Trump Tweet During The Super Bowl?

We all know that President Donald Trump’s favorite social media platform is Twitter. However, he doesn’t exactly have a friendly history with the NFL. Back in the 1980’s Trump was affiliated with the USFL which was a direct competitor of the NFL. The USFL lost that battle and folded. Additionally, President Trump has been an outspoken critic of NFL players who kneel during the National Anthem.

The oddsmakers project President Trump to be relatively quiet on Twitter during Super Bowl LIV. The Over-Under for his tweets is set at 1.5 with Over being the underdog at +160 and Under the favorite at -200. Based on that line we’ll take the Under and anticipate only one tweet from the President.

Will Any Scoring Drive Consume Less Time Than The National Anthem?

The Over-Under for Demi Lovato’s rendition of the National Anthem is currently set at 1:55. So basically this prop is asking bettors if they think either team will successfully complete a two-minute drill. Most NFL games see a team accomplish that which is why “Yes” is favored at -260 and “No” is the underdog at +175. In a game that features Patrick Mahomes and the explosive Kansas City Chiefs offense we’re going to say “Yes” on this wager.

Which Company Will Air The First Commercial?

This prop bet is somewhat of a longshot but there is some decent value. Obviously Super Bowl ad time is incredibly expensive so there’s decent value firing on a company that’s a household name. The board lists Bud Light and Budweiser at +1500, followed by Coke +1900, Hyundai +1900, Skittles +1900, M&Ms +2400, Kia +2400 or none of the above and taking the favored Field at 2 to 3 odds.

Super Bowl prop bets are supposed to be fun so for this one we’ll go with a traditional commercial superpower, Bud Light. Enjoy the game and good luck!