Gov. Bill Lee of Tennessee had until late May 2019, to either veto or sign into law House Bill 0001, which would legalize online sports betting. The deadline passed with neither a veto or signature, and the Tennessee Gambling Act has gone into effect as of July 1, 2019.

The First State in the US to Legalize Online Betting 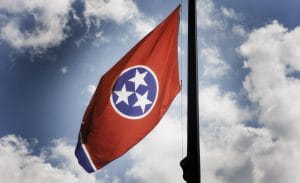 The flag of the state of Tennessee © Phillip Dodds / Flickr

Tennessee is marked as the first state in the US to legalize online betting while also outlawing all forms of brick-and-mortar gambling. Nowhere in the state is there a casino or racetrack of any kind. So, prior to this law, any form of legal gambling by a Tennessean would have taken place in a different state or country, or by joining an unsanctioned online casino. In many states with Native American reservations, gambling is legal within those designated territories, even when the state itself has outlawed casinos. However, Tennessee is one of just 14 of 50 states in the US without recognized tribal lands. While Tennessee Gov. Bill Lee is an outspoken opponent of gambling in its every form, he treated the passage of this law as a compromise in regards to his state’s continued commitment to banning brick-and-mortar casinos and sportsbooks.

In a statement posted to his Twitter account, the governor said: “Compromise is a central part of governing, but I remain philosophically opposed to gambling and will not be lending my signature to support this cause. We this issue differently but let me be clear: any further efforts to expand gambling or introduce casinos in Tennessee will assure my veto.” A few unusual stipulations stand out in the Tennessee Gambling Act (Tennessee HB1). Firstly, in order for online sportsbook operators to offer in-game betting, they have to enter a commercial agreement with the league itself. Secondly, the licensing fee is an annual payment of $750,000 – on top of a 20% revenue tax. These requirements are heftier than states that have already enacted similar laws, several of which came into effect this year after New Jersey won a Supreme Court case that lifted the federal ban on sports betting in 2018. The landmark case gave individual states the right to ban, legalize, and regulate sports betting within their borders without federal interference.

Sports Betting Situation in Other States

Before New Jersey won their case, sports betting was federally banned. However, some exceptions were given to states like Nevada and New Jersey, locations with such gambling hubs as Las Vegas and Atlantic City, respectively. As mentioned above, Native American casinos could exist in many states where gambling was banned. But interestingly, some tribal territory casinos were still banned from opening a sports betting area until 2018’s decisive Supreme Court decision. The 20% revenue tax imposed on sportsbook operators in Tennessee is estimated to gross the state $50 million. According to the Tennessean, these funds will be allocated for education, local government, and addiction treatment. For the latter cause, it is reportedly seeking to treat all forms of addiction, including opioid, rather than just gambling addiction. However, gambling revenue projections are famously inaccurate. In fact, they’re more often wrong than right, with Illinois, New York, Ohio, Pennsylvania, Rhode Island, and New Jersey all reported numbers significantly below the projected expectations. Based on past miscalculations, it would likely be more realistic for Tennessee to expect half their projection, or $25 million. In more Tennessee sports betting news, the March Madness and Fantasy Football Freedom Act (HB1033) passed on April 15, 2019. Despite Gov. Bill Lee’s Republican Party affiliation, the bill was a republican led initiative that decriminalized some forms of fantasy sports wagers and pool betting. Basically, before this bill was passed, the countless office pools and fantasy sports leagues among friends that involved risking money was technically illegal. Limitations include a maximum buy-in of $25 and a maximum total pool of $1000. Unlike HB1, HB1033 passed with the Gov. Bill Lee’s signature.