The Northern Territory Gambles on Pockies the Most

Roy Morgan, a market research company, has released its Gambling Currency Survey that reveals details that gambling on slot machines is going down. 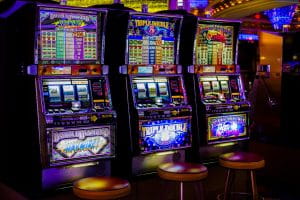 Poker machines in a casino © Bru-nO/Pixabay

The report’s findings are limited to a single source survey conducted by Roy Morgan on a weekly basis following detailed face-to-face interviews with more than 1000 Australian residents.

The Northern Territory holds Australia’s highest betting and slot machine participation rate among all Australian states and territories, as per the latest data given by the market research company’s report Nevertheless, Western Australia has revealed the largest scratch card and lotteries participation rate.

The Northern Territory had the highest proportion of bettors who favor slot machines. During an average three-month period, a total of 23.6 percent of NT adult residents wagered on a gambling machine, reveals the report.

It Even Exceeds The National Average, According to Roy Morgan’s CEO

Ms. Levine decided to share that the amount of Aussie citizens placing bets on slot machines dropped by 50% from 4.8 million to 2.4 million over the past 18 years. Nevertheless, the participation rate of pokies in the Northern Territory is almost one in four, making the entire percentage rate in the state almost twice that of the nation’s average of 12.3 percent.

She also stated that the Australian national average has been kept fairly small by Western Australia’s 5 percent rate where the use of pokies outside casino facilities is not permitted.

The manager of the market research firm observed that gaming involvement in the country has generally decreased for a few years.

Based on the findings reported in the Gambling Currency Report Northern Territory once again reports the top betting participation rates. The report revealed that in an average three-month period, 15.3 percent of NT adult residents had played.

For those not familiar with the work of Roy Morgan, it is a research company founded by Roy Morgan himself in 1941. Therefore, throughout the years the company remained to be the oldest and best-known market research company in the territory of Australia. Moreover, the company managed to remain independent and free of hidden agendas which unbiased reports of the political climate has even caused politicians to ‘tremble with fear’.

Its Morgan Poll also has played a prominent role in reporting public opinion on current issues around the country.

This time Roy Morgan revealed interesting facts in regards to the decrease of poker machines in Australia. As already mentioned above it was conducted on 1000 Australians who are old enough to gamble. Their study showed that the Northern Territory of Australia still holds the highest rates of betting and poker machine participation compared to all other states across the country. On the other hand, the highest scratchcard and lotteries participation was noticed in Western Australia.