The Politics of Gambling Legalization in America

It’s rarely difficult to find out where average republicans or democrats stand on mainstream issues. But, interestingly, the topic of gambling is not easy to pinpoint. Typically—and while disagreements are had within the two major American political parties—there tends to be a general consensus on broad policies. For example, an average democrat supports stricter gun restrictions, while an average republic supports stricter immigration enforcement. Any curious party can pull up these issues in a matter of seconds. So why can’t the same be said for gambling?

The short answer: it’s not really a national issue, it’s a state one.

Gambling Popularity Depends on the State 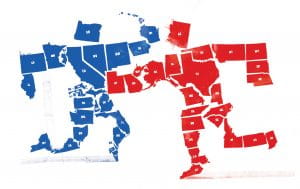 Legal online gambling is limited to New Jersey, Delaware, Pennsylvania, Rhode Island, Nevada, and West Virginia, all of which are either strongly liberal or common lean liberal. However, due to neighboring Iowa’s looser regulations on gambling, voters in Nebraska are circulating petitions to keep the residents’ gambling revenue in the state, since it’s perfectly legal to cross the border, place a bet, and return home. While Iowa is a reliable swing state during presidential elections, Nebraska is a historically conservative stronghold. Further, in the 2016 presidential elections, then-candidate and now-President Donald Trump won Pennsylvania, Iowa, Nebraska, and West Virginia.

Moreover, it’s the current bipartisan efforts that really highlight the lack of hard party-line stances on the issue. Together, Democrat Chuck Schumer and Republican Orrin Hatch introduced a bill that would increase consumer protections in the gambling industry. Democratic Senator Elizabeth Warren teamed up with Republican Senator Steve Daines to cosponsor a bill aimed at curbing gambling addiction among veterans. In America, if both sides of the aisle can agree on industry regulations, that’s a good indication of the issue’s bipartisan flexibility.

Gambling Isn’t a Single-Issue Political View for Most Americans

Members of a single-issue political pressure group vote for a candidate based entirely on their stance on one issue. While only a few issues garner true single-issue support, many can swing a voter one way or the other. Take the 2020 Democratic Party primaries as a prime example. The candidates agree on a wide range of issues, but differentiate themselves based on their stances on the urgency of climate change, the validity of single-payer healthcare, and so on. If the candidates are interchangeable for a voter in all ways but one issue, that’s—at least on the cusp of—single-issue voting.

Gambling doesn’t hold that sway on a national level, making it a case-by-case, state, or oft-ignored issue.

In the early 20th century, a man named Wayne Wheeler became the grandfather of single-issue pressure politics. As leader of the Anti-Saloon League, he would select candidates regardless of party but instead endorsed politicians who were in favour of prohibiting alcohol. That was it. The single-issue voting block that Wayne Wheeler and the League influenced was small, but it was large enough to decide candidates in close elections. Ultimately, it was through that tactic that led to a prohibitionist majority in Congress, which triggered Alcohol Prohibition in the United States.