After receiving federal approval on Wednesday, up to 9 tribal casinos in Washington will be ready to offer sports wagering by the start of the NFL season. Upon signing a separate agreement with those tribes in July, Gov. Jay Inslee presented the compact for approval. 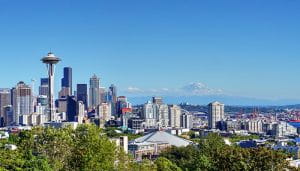 The Puyallup, Tulalip, Lummi, Cowlitz, Spokane, Snoqualmie, Squaxin, Suquamish, Stillaguamish tribes got their sports wagering compact modifications approved by the US Department of Interior just a few days ago.

Kalispel, Swinomish, Muckleshoot, Jamestown S’Klallam, Skokomish, Shoalwater Bay, and the Confederated Tribes of the Colville Reservation have all submitted applications, but none have been approved.

A few tribes from Washington aim to start offering sports betting this month, whereas others aim to launch in October or November.

When Will Be The Launch?

According to the executive director of the Washington Indian Gaming Association, Rebecca George, the actual timing of sports betting would be determined by some casinos and how much they have completed the necessary requirements. These safeguards include acquiring authorized vendors, as well as other possible security and logistical difficulties.

“We do gaming right, and the public can be satisfied that we will conduct sports gambling fairly and carefully,”- concluded George.

The latest announcement comes about 30 days after the Washington State Gambling Commission gave its official approval to tribal sports betting plans, intending to open the sector by Sept. 9.

The Snoqualmie Casino’s president and chief executive officer, Stanford Le, stated they worked very hard with the statewide gambling commission and its suppliers to complete licensing applications with the goal of going online before the start of the normal football season.

Since the Supreme Court of the United States threw down PASPA in 2018, Washington gaming tribes have been working to regulate sports wagering. Washington legalized restricted sports betting in March 2020, however, it required over one year for the tribes and the state to agree on a tribal compact amendment.

Sports betting is currently exclusively permitted on the grounds of tribal casinos in Washington. Gambling on big-league professional sports, sports matches in colleges, and big international events are legal under the law. Wager on college sports between in-state institutions, however, is prohibited.

Only tribal casinos have the ability to accept mobile bets. Any type of online wagering is still a felony of Class C in Washington outside of a tribal facility.

More About Sports Betting In The US

The Washington State Gambling Commission is considering granting licenses to as many among 15 operators, including industry titans DraftKings, FanDuel, Caesars, and BetMGM.

According to the WIGA, tribal gambling in Washington offers over 37,000 jobs and generates over $5.3 billion in GSP. It also brought in $722 million in revenue in total.

Legalizing sports betting in the US became possible in 2018 when the Supreme Court removed the federal ban and allowed all the states in the country to decide on their own whether they want to legalize that kind of activity within their borders or not. After the ban was removed, many states decided to legalize sports betting and provide bettors the opportunity to wager while being in their home state.