Finally, the ban on betting TV advertisement is showing some results! The prohibition on betting ads in the UK during live, televised sports has drastically decreased children’s ability to see such advertisements. Introduced as the commercial ban on “whistle to whistle,” the move allegedly lowered children watching advertising by 97%. Enders Analysis recently conducted a report to demonstrate that children aged 4 to 17 had significantly decreased exposure to betting. 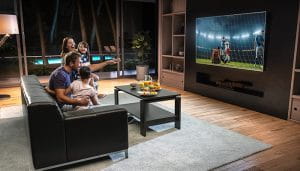 During the limited time, the effect of the advertising ban was effectively excluded from sports betting on TV advertisements. The study found that the number of gambling ads watched by young people dropped by 70% over the entire length of live sports programming.

In the first five months after the changes were implemented, the whistle ban led to a 1.7 billion-view drop in these advertising. At the same time, the ban saw 109 million less gambling ads on four comparable weekends.

“The success of the whistle to whistle ban is a clear example of that commitment, and I’m very pleased at how effective it has been during its first year in operation,” – said Michael Dugher, CEO of the Betting and Gaming Council.

Dugher reflected on the improvements in advertising and expressed his satisfaction to see that the ban has primarily eliminated children’s ability to see betting advertisements when watching live televised sports. In order to ensure progress in the short-term and long term, the Council is committed to raising business quality and implementing reforms.

The Betting and Gaming Council was formed in 2019 and had been working hard since that time to improve game industry standards. In addition to the ban on whistles, at least 20% of TV and radio gambling advertisements contain healthy gambling messages.

Cooling down intervals are also set for gaming consoles and new ID and age verification procedures. The organization allows players to have deposit caps to protect them from gambling problems. Support for research, gambling education and care has been increased.

The idea was to protect vulnerable people from gambling addiction as gambling indeed increased during lockdown due to the new coronavirus, which was declared a pandemic by the World Health Organization in March of this year. The casinos and sportsbooks were also closed in an attempt to prevent further spread of the coronavirus known as COVID-19.