Will America Lead the Way for AR and VR Gambling?

The United States is the third most innovative country (after Switzerland and Sweden, respectively), and it has the highest density of high-tech, publicly traded companies. With this and mind—and given the continued legalization of online gambling in states across the country—America may be in an ideal position to enter the worldwide AR and VR gambling market. But what does the trend look like, and where is it going? Read on for a closer look.

What Is Virtual Reality Gambling? 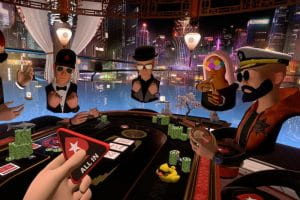 A screenshot of VR Poker at PokerStars © PokerStars

VR Gambling is when a player places bets using a virtual reality headset. The purpose is to feel more immersed in the betting experience. Similar to a standard online casino game on a computer screen or mobile device, a VR casino game can be played from home. However, the specific presentation of the gambling experience is dependent on the betting that’s taking place.

For example, online poker—where players can play against real-life opponents—is an intuitive option for VR gambling. Players can customize their avatar, sit at a digital table, and experience the gameplay at a more face-to-face level.

Another example would be a virtual casino lobby. Rather than click and scroll through the gaming selection, players can walk through a casino floor, sit down at the options that appeal to them, and start playing.

Again, the point for both examples is to deliver a more immersive online gambling experience.

What Is an Augmented Reality Casino Game?

If someone sat at an empty table while wearing a VR headset and played poker against others, that’s fairly close to the definition of augmented reality gambling. However, it would be virtual reality. Unfortunately, augmented reality betting is difficult to define with specifics because, well, there are no specifics. Augmented reality requires the digital manipulation of the physical world.

For example, some stores let customers point their phone camera at a spot in their home, then place a digital version of whatever item they’re considering (like a couch or lamp) into that spot.

So how would that translate for gambling? It’s difficult to imagine. An operator would either need to incorporate betting games into the physical world, like dealing blackjack cards on a kitchen table. Or, integrated into a physical space, like hidden games only for players using augmented reality. The point is, the possibilities are endless – especially since it’s starting at square one.

Where Does the AR and VR Casino Market Stand Today?

Right now, the more prominent companies developing AR and VR online gaming are established entities in the online gaming market. Brands like NetEnt and Microgaming, two huge industry names. But NetEnt is located in Stockholm, Sweden, and does not make their games available to players located in the US. The same goes for Microgaming, which is located on the Isle of Man. In fact, Microgaming opened up the first-ever online casino in 1994, and the brand continues to stay on the cutting edge after the better part of three decades.

So, it should come as no surprise that players located in America are not currently accepted at any legitimate online casinos with VR.

However, because the VR games themselves (rather than the hardware) are where the money’s made, the viability of American online casinos investing in VR options will increase as more folks can afford the hardware. Further, the worldwide VR market’s estimated value in 2019 is $16.8 billion. By 2023, it’s expected to grow to $160 billion, or 10x what it is right now.

So VR gambling may be out of reach at the moment, but given the ongoing upswing in online gambling popularity in the United States alongside the massive expected growth of VR, it’s a safe bet that Americans will have some options available soon. In the meantime, online gambling is the next best options for a casino experience without leaving home.