The UK’s National Health Service will be receiving a £2.6 million from the British gambling operators. The grand donation comes from the 2020 Virtual Grand National profits. 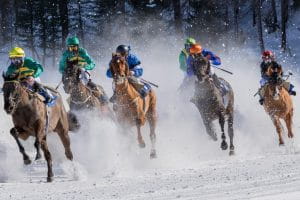 Bookmakers that include; Ladbrokes Coral, Sky Bet, Paddy Power Betfair, Bet 365, Bet Way, the UK Tote Group as well as technology inspired entertainment, William Hill, and Betfred, all agreed to donate every single profit made from the event to the NHS charities. This will be done after all duties and winnings are paid.

The chief executive of industry standards body for the betting and gaming council (GBC), Michael Dugher, said that they are overwhelmed with the public support for the Virtual Grand National and the support shown for the NHS Charities Together.

Dugher went on to add that, ‘’ The country is going through what is little short of a nightmare at the moment, so it was heartwarming to see pictures on social media of so many people enjoying themselves watching the excellent ITV Racing and Carm Productions program which had such impressive viewing figures, I’m sorry we couldn’t have the real Grand National to find out if Potters Corner would have won or whether it would have been an historic three in a row for Tiger Roll, but at this time of need the nation used the day to come together and back our NHS.”

The event was staged after the cancellation of the actual race due to the corona virus pandemic. Potters Corner ended up winning the race 18-1 shot. Bookmakers paid out on the ‘’winner’’ and are donating profits from losing bets. The race was watched by 4.8 million viewers at its peak. This number represented 30 percent of the overall television audience.

Potter Corners’ trainer, Christian Williams, told BBC sport that he and his family were cheering on during the race. He also said that there was excitement in the house and that it was great watching the race and seeing their horse go through to win.

All horse racing events in Great Britain have been suspended at least until the end of April. Forty runners who would have been most likely to line up at Aintree took part in the Virtual Grand National, using CGI technology and special algorithms.

Dugher also praised horse racing governing body the Jockey Club’s decision to donate 10,000 tickets to the National Health Service (NHS) and social care sector for the first day of the 2021 Grand National Festival. Dugher said, “It’s also fantastic that the Jockey Club will be donating 10,000 tickets to the NHS and social care sector in Merseyside for the first day of the 2021 Randox Health Grand National Festival at Aintree”.

Profits from bets placed in Ireland will be donated to Irish charities including the Irish Red Cross, though the amount raised from these bets has not been announced.