It’s nearly the All-Star Break and half of the NBA season is in the books. The following are some noteworthy trends and statistics from a gambling perspective. In general and unsurprisingly, we see that good teams are better against the spread and bad teams have had less success covering the number. 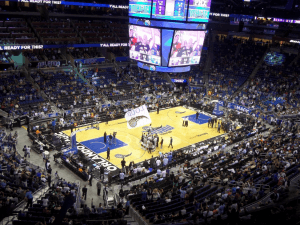 When the Oklahoma City Thunder traded Russell Westbrook to the Houston Rockets in exchange for Chris Paul, most people anticipated that the Thunder were entering a rebuilding stage. The Thunder haven’t been nearly as bad as expected. They’re actually pretty good at 30-20 overall. However, they do offer value from a gambling perspective. The Thunder have the best record in the NBA against the spread at 34-16.

The remainder of the Top Five teams against the spread are:

This works both ways. The New York Knicks have one of the worst records in the NBA at 14-37 yet they’re 9th best in the NBA at covering the spread. Washington is 17-31 overall but 11th best at covering the spread. Golden State has won a league-worst 11 games yet they’ve won against the spread 24 times. Bad teams are not always a bad bet because they’ve typically got a high point-spread working in their favor.

The Detroit Pistons Are Bad In Every Way

Despite getting nice contributions from players like Derrick Rose and Andre Drummond, the Detroit Pistons are having a disappointing season. Amazingly, they’re almost identically bad overall (18-33) as they are against the spread (18-32-1).

The Oklahoma City Thunder are far and away at the top of this list with 15.4 units won. They’re followed by the Boston Celtics at 9.2, the Dallas Mavericks at 7.0, the Toronto Raptors at 4.9, and the Miami Heat at 4.0.

At the bottom of the list we once again see the Detroit Pistons who have 16.1 units lost. They’re followed by the Minnesota Timberwolves at 14.9, the Portland Trailblazers at 14.8, the Chicago Bulls at 8.9 and the Cleveland Cavaliers at 8.5.