Here are the best daily fantasy quarterback options for week 10 of the NFL season: 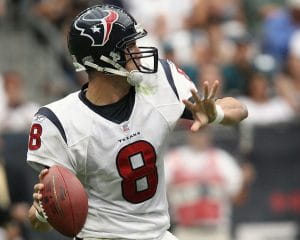 Last week Lamar Jackson outplayed the legendary Tom Brady and handed the Patriots their first loss of the season. This week he faces the Cincinnati Bengals who have yet to win a game this season. The Bengals have also benched veteran quarterback Andy Dalton in favor of rookie Ryan Finley as they are more concerned with the future than the lost 2019 season.

This should be an easy win for the Ravens and Jackson will be sure to rack up fantasy points in the process. The Bengals have allowed the seventh-most fantasy points to quarterbacks in 2019. Back in week 6, Jackson torched the Bengals for 236 passing yards and 152 rushing yards. It’s reasonable to expect another dominating performance from him against the only team in the NFL that has yet to win a single game.

Drew Brees returned from injury two weeks ago and showed absolutely zero rust as he threw for 373 yards and three touchdowns against the Arizona Cardinals. The Saints are among the NFC’s elite and the only game they’ve lost this season was back in week 2, the game when Brees was injured. The Saints are coming off their bye week giving Brees additional time to rest and recover.

In week 10, Brees faces the Atlanta Falcons who have lost six games in a row. During that span, they failed to register a single interception of opposing quarterbacks. With a 1-7 record the Falcons have pretty much given up on the 2019 season and head coach Dan Quinn is likely to be fired in the coming weeks. The Falcons have allowed the third-most fantasy points to quarterbacks this season and under the circumstances, that’s unlikely to improve.

The number one overall pick from the 2019 draft is developing nicely. In week 9 against the undefeated San Fransisco 49ers, he threw for 241 yards and two touchdowns without throwing an interception. The Cardinals nearly pulled off the upset against the NFL’s lone unbeaten team.

Murray gets a much easier opponent in week 10 when he faces the Tampa Bay Buccaneers. Last week the Bucs allowed the Seahawks’ Russell Wilson to throw for 378 yards and five touchdowns. Tampa has been awful defending the pass this season allowing the fourth-most fantasy points to quarterbacks.

Murray also has a new weapon at his disposal following the Cardinals’ recent trade with the Miami Dolphins for running back Kenyan Drake. Drake seamlessly fit into the Cards’ offense with over 160 yards from scrimmage against the 49ers.

There should be plenty of fireworks in the Buccaneers-Cardinals game. While Jameis Winston might not be a great actual NFL QB, he’s been very good from a fantasy perspective. He’s thrown for over 300 yards in each of the last three games. While the Buccaneers pass defense is bad, the Cardinals’ are even worse. They’ve allowed more fantasy points to quarterbacks than any team in the NFL this season.