Here are the best daily fantasy quarterback options for week 14 of the NFL season: 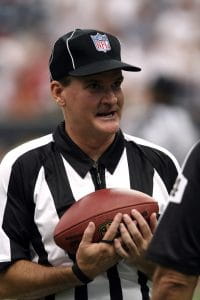 An NFL referee cradling the football © Keith Johnston from Pixabay

Lamar Jackson is the current front-runner for MVP and the Baltimore Ravens are currently the betting favorite to win the Super Bowl. He’s already had extremely productive fantasy games against some of the NFL’s elite teams, such as the New England Patriots, Seattle Seahawks, Houston Texans and last week against the elite defense of the San Francisco 49ers. Jackson has not thrown a single interception in any game from October 6th to December 1st.

Whether by air or by ground he’s producing fantasy points. In week 14, he’ll face the Buffalo Bills. The Bills give up the second-fewest fantasy point to quarterbacks but with Jackson it doesn’t matter. The man is matchup-proof and he’s proven it time and again this season dominating the NFL’s elite teams.

At worst, Russell Wilson is currently in third place for NFL MVP behind Lamar Jackson of the Baltimore Ravens and Christian McCaffrey of the Carolina Panthers. He’s been the second-best fantasy quarterback in the NFL this season but his last two weeks have been less than stellar.

However, in week 14 Wilson has an ideal matchup against the Los Angeles Rams. The Rams are an average team in terms of allowing fantasy points to quarterbacks but Russell Wilson isn’t just any quarterback. He’s a quarterback that has dominated the Rams throughout his illustrious career. Back in week 7 he completed 17 of 23 passes for 268 yards, four touchdowns, and zero interceptions to go along with 32 rushing yards. The Rams won’t have any answers for him this time around either.

The 2019 season hasn’t been quite the party that 2018 was when Mahomes won the MVP award despite being a 66-1 longshot during preseason. He’s missed a few games due to a knee injury but still produced solid season numbers and has the Chiefs in first place in the AFC West.

He’ll be facing a stout New England Patriots defense in week 14. While the Pats have shut down many quarterbacks this season, Mahomes has faced them twice in his career and put up huge numbers in both games. One of the most memorable games of the 2018 season was the shootout between Mahomes and the legendary Tom Brady. The Patriots won the game 43-40 but Mahomes had a monster fantasy day with 368 yards and four touchdown passes.

The Minnesota Vikings entered the season with a run-heavy approach under new offensive coordinator Kevin Stefanski. That did not bode well for quarterback Kirk Cousins from a fantasy perspective to start the season but things have changed dramatically. Cousins has been on fire the last several weeks throwing only one interception since October 20th.

He’s also done it without his top wide receiver, Adam Thielan, who returns from injury in week 14. Additionally, running back Dalvin Cook suffered a shoulder injury against the Seattle Seahawks and may miss time meaning the Vikings will rely more on the pass, which is a pretty good approach against the Detroit Lions because in week 7 Cousins lit them up for 368 passing yards and four touchdowns.