Connecticut is looking to expand on legalized gambling within the state, in a big way. Among the considerations on the table are building casinos, permitting sports gambling, and selling lottery tickets via mobile devices. Connecticut Governor Ned Lamont is supportive and actively assisting with the process. 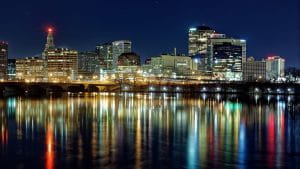 The skyline of Hartford, Connecticut © Jmaro Morales from Pixabay

The Native American tribes Mashantucket Pequot and Mohegan have exclusive rights to conduct gambling operations in Connecticut. They are overseen by the Federal Bureau of Indian Affairs who don’t want to concede a reduction in revenue without something in return. Governor Lamont is among the Connecticut lawmakers who negotiated with the two tribes who operate Connecticut’s only two casinos. The Connecticut Jobs and Revenue Act gives the tribes exclusive rights to offer sports gambling in the state, on the condition they invest $100 million in a gaming facility in the state’s largest city, Bridgeport.

More and more states are easing restrictions on sports gambling following the 2018 ruling by the United States Supreme Court that states could legalize betting on college and professional sports if they choose. Before the Supreme Court ruling, Nevada was the only state to legally accept sports wagers. Following the ruling, several states have seized the opportunity to generate additional revenue, including some of Connecticut’s neighbors such as New York, New Jersey, and Rhode Island.

Connecticut lawmakers already have a location in mind for a sports betting facility. Hartford is among the largest cities in the state and home to the XL Center. The XL Center is an older facility and the mayor of Hartford, Luke Bronin is excited about the potential revenue sports gambling could generate for the city.

The gambling-expansion bill includes language which would allow the tribes to operate sports gambling complexes in Hartford with an “Entertainment Zone Facility. Sports gambling would be taxed at 8%. Entities such as MGM have threated legal challenges should the tribes be granted exclusive rights to offer sports gambling. Governor Lamont addressed the subject to the Chicago Tribune by saying, “I’ve got to see where all the players are on this because if it gets stuck in the legal muck like it’s been for the past five years we’re not going to show any progress.”

The two Native American tribes were approved their partnership to build and operate a casino in East Windsor. It is expected to open late in 2019 on a 26-acre site which was formerly a movie theater. It will be competing for business with an MGM casino recently opened in neighboring Springfield, Massachusetts.

Another city anticipating a new casino is Bridgeport. The city has long been a desirable location for gaming entities, such as in the 1990s when Donald Trump submitted a proposal for a casino resort. More recently, Bridgeport initially agreed to build a $670 million waterfront gaming complex with MGM in 2017 which never came to fruition. Despite that deal falling apart, Bridgeport still actively pursued a casino to stimulate their struggling local economy.

They reached an agreement with the two Native American tribes on a more modest casino with an estimated cost of $300 million. The proposal was included as part of the Connecticut Jobs and Revenue Act. Representative Christopher Rosario provided a written endorsement, “I’m proud to support this bill and urge other elected leaders to join the fight.”